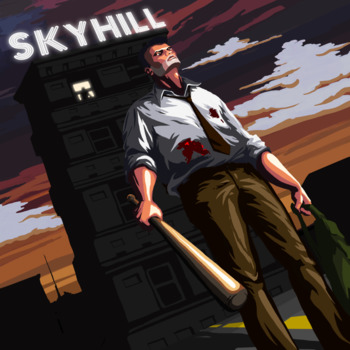 You came to this city for a few days on business, so you decided "Why not spend those days in style?". You booked a room at the Skyhill, a luxury hotel. What room? Why the penthouse of course. Top floor, with the latest biological defense system. You could not have picked a better time to be there, because not long after, a biological warhead lands smack dab in the city, and you can see the green mushroom cloud from your window. Nobody is left to answer the phone, but you can hear screaming outside... then growling... then scraping. But after a few days, you've run out of food.

You ultimately decide you would rather be torn apart by whatever's out there than starve to death in the penthouse. So, you decide to leave the safety of the penthouse and make the long trek down one hundred floors populated by ravenous bloodthirsty mutants to exit the building.

is a Roguelike Survival RPG by Mandragora Games

A 3D isometric top-down sequel, Skyhill: Black Mist, is scheduled for release on May 28, 2020.