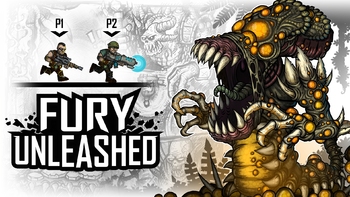 Fury Unleashed is a sidescrolling action-platformer Shoot 'em Up with Rogue Like elements, released on Steam by Awesome Game Studio. It was initially released in Early Access before being fully released in May 9th 2020.

The storyline is that the titular Fury, a formerly popular comic book protagonist is fighting through their past adventures in an attempt to discover the history of their author John Kowalski and hopefully rile him from his slump. To that end, they battle through three trade-paperbacks, a May Inca Tec jungle romp, and Alternate History World War 2/Time Travel rampage through a secret Nazi research facility, and an assault on an alien starship.