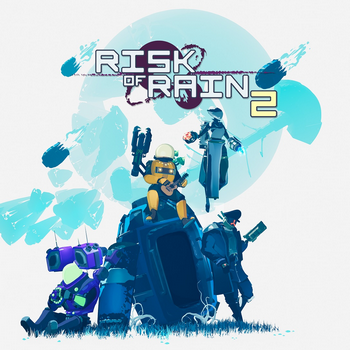 Risk of Rain 2 is a Science Fiction Roguelike Third-Person Shooter developed by Hopoo Games and published by Gearbox Software. The game is a sequel to Risk of Rain. It was released on Steam Early Access on March 28th, 2019, before reaching a Final Release on August 11th, 2020.
Advertisement:

The game is mechanically similar to the first game, with the goal of locating a teleporter in a level and activating it as the difficulty increases every 5 minutes. The game sets itself apart by being in 3D, rebalancing various mechanics to adjust, and contains a vastly improved Co-Op Multiplayer with up to 4 players.

After receiving a foreboding Distress Call from the UES Contact Light (the ship from the first game) the Safe Travels is dispatched to go on a "rescue" mission. However, as the aforementioned distress call mentioned monsters, fighting, and the Contact Light being shot down and its cargo crashing down upon the uncharted planet closest to it, it's obvious that despite being called a "rescue", the true task of the mission is simple: Go down to the planet, retrieve as much reclaimable cargo as possible, and if possible, find out what the hell happened. And, naturally, kill every last thing that tries to get in their way.