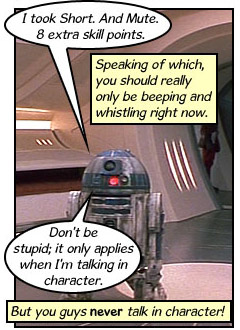 Dellyn Goblinslayer: You have Improved Unarmed Strike?
Minmax: I got it by trading in my ability to rhyme on purpose.
— Goblins
Advertisement:

The art, much beloved of munchkins, of optimizing a character's abilities during creation by maximizing the most important skills and attributes, while minimizing the cost. This is done by strategic decrease of stats believed to be less important in game (called "Dump Stats"), exploiting hideously overpowered but legal combinations of the Game System, obtaining the best toys and magic weapons accessible to a character, or by stacking flaws and handicaps until your character's Backstory looks like a Joss Whedon character's resume.

Seen from a purely mathematical and gamist perspective, it's an elegant process of minimum expenditure for maximum result.

Seen from a more narrativist perspective, the process may end up creating a character with absolutely no unifying reason to have the abilities that it does.

Of note is the "Stormwind Fallacy,"note named after Tempest Stormwind, a poster on the Wizards of the Coast forums who described the fallacy, and not related to the human kingdom in World of Warcraft which states that a min-maxed character and a well-roleplayed character are mutually exclusive: it is a fallacy because an effective character is not necessarily something that gets in the way of the narrative. Similarly, purposefully weakened characters may not always be better for the narrative. If anything, it can be the opposite; a character who is wholly incompetent can drag down the rest of the party and make it hard for them to roleplay, and in most adventuring groups, it's assumed that the main characters are at least good at their jobs, making the minmaxer's stronger builds Gameplay and Story Integration. It's also important to note that a min-maxed character still requires quite a bit of ingenuity from the player to accomplish what the player wants to during the actual game.

When minmaxing results in a character that's ineffective early on but becomes a Game-Breaker by late game, you have a "carry" character who must be supported by their party to become useful. (See Magikarp Power.)

where one tries to maximize their minimum gain or minimize their maximum loss. Employing one of these strategies is more likely to bankrupt your company than make it stronger.

Related to Disability Superpower, Crippling Overspecialization, Sacrificed Basic Skill for Awesome Training. Often the reason for wearing Rainbow Pimp Gear. See Whoring for the Video Game equivalent trope. Several Player Archetypes, notably the Munchkin but also sometimes the likes of The Real Man, may employ minmaxing to achieve their goals, or even treat it as a pleasure in itself. Compare Necessary Drawback and Fantastic Fragility.

The Pathway to Invulnerability

Kaede drops all her stat points into defense, breaking the game in more ways than one.

Since the subs didn't translate it, Giant Killing's effect doubles all her core stats (not HP/MP) if at least 4 of them are lower than her opponent's and since STR, AGI, INT and DEX are left at 0 it's always active.

The Pathway to Invulnerability

Kaede drops all her stat points into defense, breaking the game in more ways than one.

Since the subs didn't translate it, Giant Killing's effect doubles all her core stats (not HP/MP) if at least 4 of them are lower than her opponent's and since STR, AGI, INT and DEX are left at 0 it's always active.