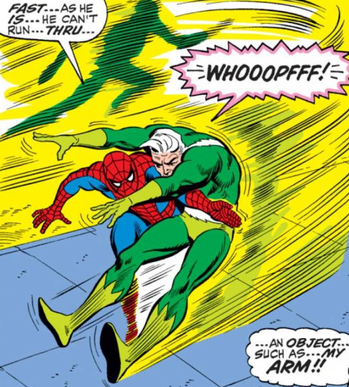 "All the world will be your enemy, O Prince with a Thousand Enemies. And if they catch you, they will kill you. But first, they must catch you."
— Frith to El-ahrairah, Watership Down
Advertisement:

The Fragile Speedster is fast. If you blink, they're not there anymore. They appear, strike, and vanish in the blink of an eye. Nine times out of ten, their occupation is a thief, a Ninja, or some other type of The Sneaky Guy or a girl. Anyone whose Elemental Power is air or wind is almost guaranteed to land in this position.

Still, being fast has its downsides — what you gain in mobility, you lose in durability. After all, it's hard to keep up that kind of speed when your armor is weighing you down. As a result, the Fragile Speedster is often forced to rely on dodging abilities to avoid getting struck in the first place, and if they do take a hit, down they go.

A Fragile Speedster often relies on Hit-and-Run Tactics or Confusion Fu to gain an advantage over slower foes. They tend to have a quick attack speed (and thus possibly a high attack rate). If the character makes up for a lack of durability by using speed as a way of evading attacks, they may even function similarly to a Stone Wall via a tactic referred to as being a "Blink Tank".

Though exaggerated in fiction, this trope has some basis in Real Life. Armor is heavy.

They tend to play as Skill Gate Characters in video games, especially fighting games, where they tend to lend themselves to Button Mashing. However, they just as often dominate the tier lists — having poor defense doesn't mean diddly-squat if you never get hit. Racing games often have a variant where the lighter vehicles have high acceleration and turning, but have a less powerful engine, lower top speed, and are also generally much easier for other racers to knock off the track in collisions due to their low mass.

Often overlaps with Glass Cannon, creating an archetype that sacrifices durability for strength as well as speed. Contrast Mighty Glacier, who sacrifices speed for strength. Heavy characters can sometimes turn into Fragile Speedsters via Shed Armor, Gain Speed. Contrast the Lightning Bruiser, who is fast and powerful without any loss to durability.

A form of Competitive Balance.

The Dapple Dualies are a lightweight weapon designed for high mobility and damage to make up for their poor range and defense.

The Dapple Dualies are a lightweight weapon designed for high mobility and damage to make up for their poor range and defense.