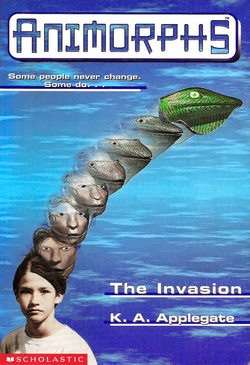 Make the change.
"We can't tell you who we are. Or where we live. It's too risky, and we've got to be careful. Really careful. So we don't trust anyone. Because if they find us... well, we just won't let them find us.

The thing you've got to know is that everyone is in really big trouble. Yeah. Even you."
— Blurb found on the back of a majority of the Animorphs books prior to book #51: The Absolute.
Advertisement:

One night, five teenagers discover that parasitic aliens, called Yeerks, are secretly infiltrating Earth by taking over people's bodies. They encounter an alien who is on their side, an Andalite named Elfangor, who, before dying from injuries sustained when his spaceship crashed, gives them the power to morph into any animal they have touched. Joined by Elfangor's younger brother and unable to trust almost anyone else, they begin a violent and secretive guerrilla war against the invading Yeerks to save the Earth.

During the course of the series, the six teenagers grow from fun-loving kids into an elite team of paramilitary troops, attacking the Yeerk invasion force wherever it is discovered. Along the way, they find allies that they never expected, enemies that prove more dangerous (and, in some cases, bizarre) than the Yeerks themselves could ever be, travel to alien worlds, and confront their own inner conflicts. Month after month of pressure begins to take its toll, and the kids are irrevocably changed from the innocent suburban youths they once were.

It supplanted Goosebumps as the most popular children's book series of the mid-1990s till the Millennium despite its incredibly dark setting and content, or perhaps because of it. Like J. K. Rowling, the author credits herself as K. A. Applegate to obscure her gender; the books were co-authored by her husband Michael Grant, an accomplished author in his own right, and most later books were ghostwritten so that Applegate could write Everworld. Applegate did still write the outlines, however, and she came back for the two-book finale.

The series heavily deconstructed the Recruit Teenagers with Attitude / Wake Up, Go to School, Save the World concept, turning what could have been a Saturday morning cartoon into pure horror. War Is Hell is in full effect, as the six protagonists have nightmares about the horrors they have to endure, are silently tormented by the morally questionable things they do, have their personal lives and relationships eroded by the struggle, and over the course of the series shed their innocence to become battle-hardened soldiers before they're even legally adults. Additionally, it is emphasized repeatedly that their efforts are not enough: the Yeerks have resources, weaponry, and soldiers in quantity and quality far beyond what five teenagers and an alien cadet could hope to defeat in open war. The group must utilize guerilla tactics to win small-scale victories and sabotage the Yeerks where they find opportunities, hoping that one day the Andalites will send their fleets to help turn the tide. But until that day, which might not even come, they are only delaying the inevitable.

Responding to fan reaction to the ending, Applegate wrote this letter

The franchise included fifty-four regular installments, four extra-length specials (the Megamorphs), two Gamebooks (which are generally considered to be of low quality), four backstory specials (The Andalite, Hork-Bajir and Ellimist Chronicles and Visser), a short-lived TV series adaptation by Nickelodeon, a series of tie-in Transformers toys, and Game Boy and PC games. A re-release of the series began in summer 2011 with new 3D/animated covers,

rewriting some of the more dated elements and also clearing up some Continuity Drift. Unfortunately, the lack of widespread marketing and poor sales of the rereleases led to its cancellation.

On September 9th, 2015, rumors of Universal's interest in an Animorphs film began to spread. The rumors purport that Deborah Forte (of Silvertongue Films and Scholastic's long-time media adaptation producer) and Universal Pictures are interested in making it happen and are currently searching for a writer/director.

In January of 2020 Scholastic began releasing audiobooks of the original novels.

A graphic novel adaptation of the first book, "The Invasion", was released October 6th of 2020, with adaptations of the next two installments in the works.

there's a best installment crowner! Please note that while it's listed under "Best Episode", this does NOT cover the TV series.

For the TV series, see Animorphs.