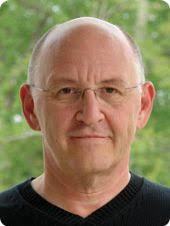 "He says he wrote GONE to creep you out. And THE MAGNIFICENT 12 to make you laugh. Some screaming and some laughing. He wants kids laughing and screaming. He's probably kind of messed up, when you think about it."
— Taken from Michael Grant's website

Michael Grant (born July 26, 1954) is an American author of middle grade and Young Adult speculative fiction born in Los Angeles, California. Before 2008, he wrote almost exclusively with his wife, K. A. Applegate, and all the work was credited exclusively to her. Starting in 2008, however, he wrote entirely on his own, with the exception of Eve and Adam.

Before he and Applegate wrote their own books, they ghostwrote for Sweet Valley Twins, a Spin-Off of the Sweet Valley High series. His books are known for being incredibly dark for books written for kids or teenagers.

Works that Grant co-wrote with Applegate with their own trope pages include:

Works that Grant wrote on his own with their own trope pages include: