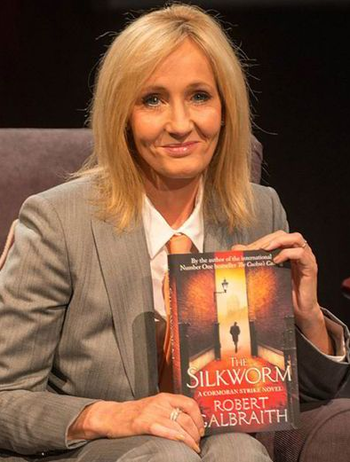 However, this has not stopped many women from writing and successfully publishing their works. They just have to pull small sleight of hand: conceal their gender. Since authors are usually not on film and therefore not seen, this can be done simply by adopting a Pen Name. Typically, female authors take one of three approaches.

Sometimes highly successful female authors will create a Moustache De Plume if they are publishing a type of book well outside their normal material. For instance, Nora Roberts (a romance novelist) published mystery books under the pseudonym J.D. Robb. When she became better known under her real name, the mystery series was credited to "Nora Roberts writing as J.D. Robb." This is ironic, as "Nora Roberts" is itself a pen name. The author's real name is Eleanor Marie Robertson.

Note: This trope is explicitly about situations where the author is credited under a name that will not reveal their gender. One way to do this is to use initials, but not everyone using their initials is trying to conceal their gender. Therefore, J. R. R. Tolkien, C. S. Lewis, H. P. Lovecraft or L. M. Montgomery (who never hid the fact that she was a woman) do not fit this trope.

There are, in fact, Spear Counterparts, as in the Romance Novel business.

Depending on how you look at it, this could be seen as the exception that either proves or disproves the rule that Most Writers Are Male.

Not to be confused with Girls with Moustaches.