Mistaken for Own Murderer 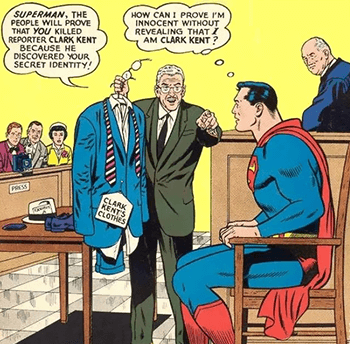 Leela: They killed my parents!
Fry: Close. (pulls down the hoods to reveal they're both purple-haired cyclopes)
Leela: They... are my parents.
— Futurama, "Leela's Homeworld"
Advertisement:

Maybe The Hero is undercover to avoid a Frame-Up. Maybe they touched the wrong artifact and became a Baleful Polymorph. The point is, they're looking different, often monstrous. Then someone (often their loved ones, for dramatic impact) catch them with their personal effects. Uh oh. Our hero has just been Mistaken for Own Murderer. Now they have to correct the mistake, and fast, before the people who made the mistake kill them in retribution for their "murder".

A subtrope of Mistaken Identity. See also Guilt by Coincidence and Mistaken for Murderer. Contrast Tomato in the Mirror and Kill and Replace.