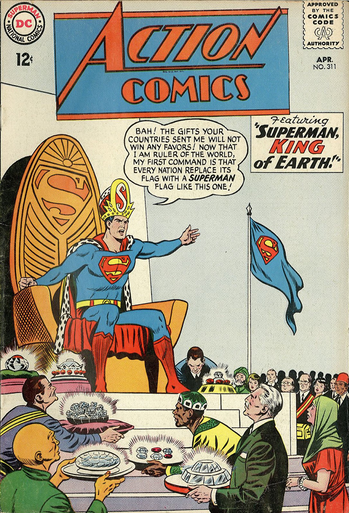 Superman's Catholic?
The sweet spot between an Emperor and a Galactic Conqueror or Dimension Lord: somebody with control over or a de facto claim to a single planet.
Advertisement:

Accomplishing this is a big milestone for any would-be despotic ruler. Be forewarned: owning a whole planet isn't easy, even if you're someone with mind-numbing physical power, superb oratory skills, ungodly amounts of cash and/or access to endless legions of disposable bad guys. Often the purview of strongman dictators, but can also be achieved through more peaceful means by a duly elected leader. Do note the logistical troubles of actually owning an entire ball of dirt (and presumably everything and everyone on it) often go unmentioned for the sake of the plot, hurdles which can be justified (or spiced up) by the addition of mind control for a more amicable populace.

How powerful a planetary ruler is largely depends on the greater scope of the setting. If they exist in a setting with a Galactic Superpower, they might be rather low on the power ranking, all things considered and could still be pushed around by interplanetary rulers more powerful than themselves. If, on the other hand, it's a universe where Casual Interstellar Travel doesn't exist, a character who rules an entire planet might be one of the most powerful characters in the setting.

An endgame goal for all those who want to Take Over the World, as well as a necessary stepping stone for further pursuits in a larger arena. Is easiest to accomplish with either a Single-Biome Planet, Planetary Nation or Planetville. Compare with One World Order, the ostensibly benevolent collective version, and Company Town, the really, really tiny version.