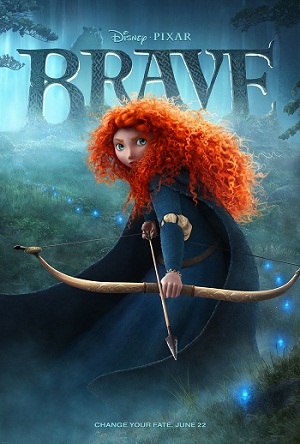 Change your fate.
Merida: I want my freedom!
Elinor: But are you willing to pay the price your freedom will cost?
Advertisement:

Brave is Pixar's 13th feature-length film, their first journey into the Fantasy genre, and their first film with a female protagonist.

It tells the tale of a Rebellious Princess named Merida (Kelly Macdonald) in the mythical Scottish kingdom of DunBroch, who wants only to live as freely as she desires. Her father, the rough and boisterous King Fergus (Billy Connolly), has an eternal grudge against all bears since he lost his left leg to a demon bruin named Mor'du. Her mother, the restrained and graceful Queen Elinor (Emma Thompson), wants her to marry the eldest son of the head of one of the three neighboring clans, all brought together under her rule. When mother and daughter have a falling out, Merida encounters a mysterious witch in the forest and buys a spell to change her mother, hoping to reverse her decision on the marriage. Said spell has unforeseen consequences for Merida and her family, leading to a race to undo it before the damage becomes permanent.

While in development, the film was called The Bear and the Bow, and was originally directed by Brenda Chapman (The Prince of Egypt), but she was replaced by story artist Mark Andrews and Steve Purcell. Chapman, who is Pixar's first female director, has a co-directing credit.

Ran in theaters along with the Pixar short La Luna.

From Fergus with love.

Example of:
Flirtatious Smack on the Ass

From Fergus with love.