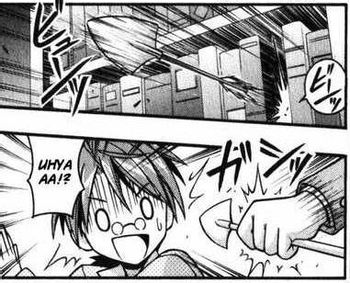 When the Archer Archetype fires an arrow and someone has enough hand speed to yank it out of mid-air, that's an arrow catch.

Like so many tropes, this one exists for one reason: it's cool. You don't have to be an arrow scientist to figure out that arrows go at crazy speeds. Very few people in the world can catch arrows, and the archer has to help them in order to make it practical, but when they do do it, it's pretty darn cool.

James Randi (a.k.a. The Amazing Randi) has discussed this, as among the many, many things he's done in his life, he's also studied archery. Most arrows used in this trick are called a flu-flu; an arrow with fletching designed for hunting birds. The arrow will leave the bow at high speed, but at a certain distance will slow down dramatically so that you can retrieve your arrow if you miss. Those who catch arrows do so after it has slowed, but before people can see that it has done so. In other words, don't try this at home unless you've got the right equipment.

It can be justified in some cases by giving a character an advantage such as Super Reflexes thanks to a innate ability or Charles Atlas Superpower. It's a good way for the Badass Normal to show off in comparison to the truly superpowered or just the general badass in works where everybody's going medieval on each other.

Beware the Trick Arrow, however! More than one would-be badass has been undone when a seemingly-normal arrow has exploded in their hands or suddenly turned into a snake.

Moxxie's Arrow ricochets around the room, knocking over an electric eel tank, causing a fire.

Moxxie's Arrow ricochets around the room, knocking over an electric eel tank, causing a fire.