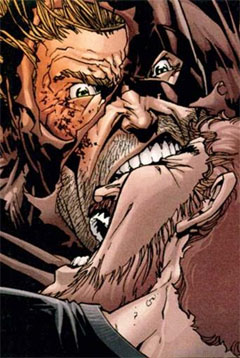 Two scoops of Eye Scream, please!
"In a wrestling match, nobody bites like Gaston!"
— "Gaston", Beauty and the Beast
Advertisement:

This trope is about biting someone in combat. Biting is typically a desperate last resort employed when limbs are pinned. However, it is a move that can turn the tables in an instant. The true Combat Pragmatist will bite any time they fancy: an unexpected bite to the throat can take a foe down quickly. That kind of savagery can also be a sign of being Raised by Wolves or being outright Ax-Crazy. Strangely, despite the brutal nature of the attack, there are far more heroic examples than villainous.

A bite can result in some of the worst flesh damage a character can do to another, without a weapon. Most other unarmed attacks depend on blunt force. Expect the bitten to react with pain, shock, and horror. As this is a trope about pragmatism, only humans and other organisms not expected to bite should be listed. No dogs, no vampires, etc. On the other hand, it can go quite wrong for the biter if it's countered or botched.

It is especially bad if the biter is some sort of carnivorous animal with sharp fangs like a cat or dog.

For a detailed analysis of the plausibility of this trope see the analysis page.

See Now That's Using Your Teeth! when the teeth are used for less meaty purposes. See also You Taste Delicious. Butt Biter is when this is done for comedy, and not necessarily to get the upper hand in a fight — and, of, course, in the butt. Contrast Bite of Affection.

Taking this one step further leads you into Eating the Enemy or I'm a Humanitarian territory.

Alternative Title(s): Take A Bite Out Of Crime