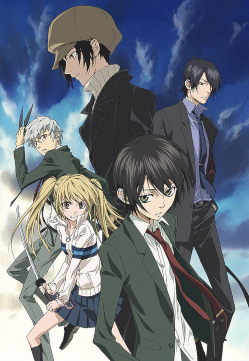 "The ninja world is at war... Whatever."
Advertisement:

Miharu Rokujou has been living a life of indifference for as long as he can remember. The life of a normal boy living a normal life planning to own a normal restaurant doesn't offer much, but he'd rather have it that way.

After being pestered by his classmate Aizawa and his English teacher Kumohira to join the ninja club time and again, Miharu is attacked by a group of real ninjas... and he still couldn't care less. But when he discovers that the ninjas are after a special hijutsu called the Shinrabanshou sealed within him, he gets sucked into a conspiracy involving underground clans of ninja and samurai, all with their own agendas for the hijutsu. With betrayal and honor at stake, staying apathetic proves challenging, especially when one young ninja from an enemy camp comes forward with a very unusual request.

A Shōnen manga by Yuhki Kamatani (author of Shounen Note and Our Dreams at Dusk) published by Square Enix's Monthly G-Fantasy in Japan, and Yen Press in North America. An anime adaptation premiered in 2008, running for 26 episodes.