Literature / The Saga of Arrow-Odd 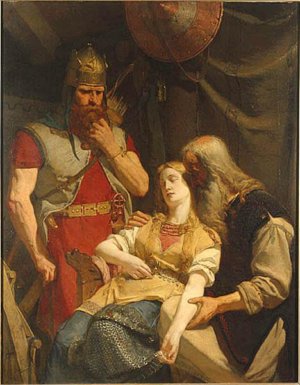 Odd, son of Grim Hairy-Cheek of Hrafnista, grows up in Berurjod in Western Norway. When Odd is seventeen, a witch prophecies that Odd will die at Berurjod, killed by the skull of the horse Faxi. Odd kills Faxi and buries him under rocks, then sets out to become a sea-rover, intent on never returning to Berurjod.

Thus begins a life dedicated to fighting and pillaging. For now that Odd cannot die unless he returns to the place where he grew up, there is nothing to stop his ruthless quest for fame, wealth and power. Except maybe that creepy guy Ogmund Eythjofslayer, a semi-monstrous viking who seems to have some unfinished business with Odd—even though Odd has never met him before.

Arrow-Odd's Saga is an example of an Icelandic lygisaga or romantic saga, a fantastical narrative set in the world of Norse Mythology but which uses traditional legends only as a starting point for creative tale-spinning. While Arrow-Odd appears in a bit part both in Gesta Danorum and The Saga of Hervor and Heidrek, only the Saga of Arrow-Odd tells about his career as an immortal adventurer, and Odd's voyages which lead him from the White Sea to Jerusalem, from Greenland to Greece, and even to lands outside the known world go far beyond the traditional geography of Norse heroic legend.