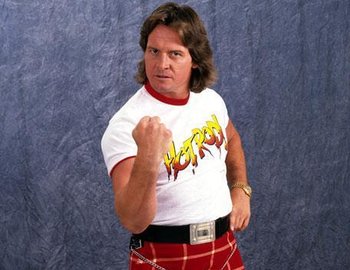 Roderick George "Roddy" Toombs (April 17, 1954 – July 31, 2015), better known by his ring name "Rowdy" Roddy Piper, was a Canadian professional wrestler and occasional actor best known for his kayfabe rivalry with Hulk Hogan and starring roles in cult films such as Hell Comes to Frogtown, They Live! and Jungleground. He also parodied himself in two episodes of It's Always Sunny in Philadelphia.

Piper was a big reason why the WWF (now the WWE) got so huge in the '80s and was one of its most popular villains. Hulk Hogan was considered a good guy back then and was one of Piper’s biggest rivals.

Known for his kilt, deafening bagpipe music, and big mouth, Piper feuded with nearly everyone in the business, along with some celebrity talents like Cyndi Lauper and Mr. T. He was also the host of All-Star Rock 'N' Wrestling Saturday Spectacular, a preview lineup of CBS kid's shows with bumper segments of Piper lording it over a studio audience.

Along with WWE and, later, WCW, he also competed in various National Wrestling Alliance territories, particularly in the Mid-Atlantic (the Carolinas), San Francisco, Los Angeles and the Pacific Northwest territory in Portland, Oregon.

Among his in-ring achievements, he was a former 5x NWA Pacific Northwest Tag Team Champion

Piper pressed pause on his wrestling career in the early '90s to act in movies full time. He returned to the WWE several times and was inducted into its Hall of Fame in 2005 and to the Professional Wrestling Hall of Fame and Museum in 2007.

"Rowdy" Roddy Piper is the Trope Maker and Trope Namer for:

"Just when you think you have the tropes, I change the indexes!":

The Maniac loves ya...