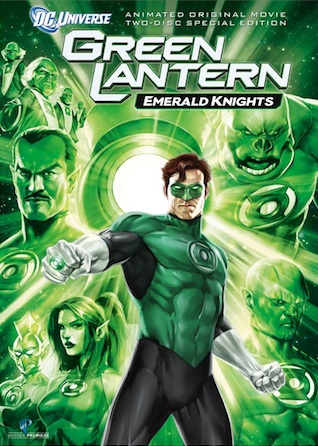 Green Lantern: Emerald Knights is a 2011 direct to DVD Movie out of DC's DVD Movie line.

An anthology much like Batman: Gotham Knight, framed as Hal Jordan telling tales of the Green Lantern Corps to the newly recruited Arisia Rrab as they prepare to fight an attack from the Antimatter Universe.

While something of a tie-in to the Live Action Film it's not in the same continuity, and shares the drawing style and character models with Green Lantern: First Flight, though it's not a sequel to that either (where Hal is the rookie and Arisia is the veteran).

The anthology, with a framing story that is loosely based on the first Tales of The Green Lantern Corps. Comic Book miniseries, contains the following stories, which are mostly adapted from comic storylines going from the Eighties to the current volume, of: