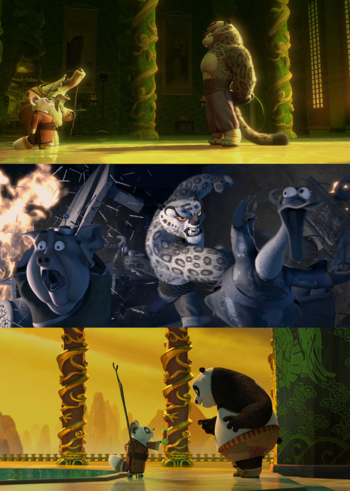 So The Hero has a spiffy office, title or position, probably with lots of cool benefits, like powers, technology or inside knowledge. He's been doing it for a while, so he's thinking he's the best there is.

Enter the Hero's Evil Predecessor. This is the guy who had that cool office, title, position, what have you, along with all its perks, before the hero probably even heard about it, and he often shows up right when the hero thinks he's got this thing figured out.

He's more competent and more experienced, and the only reason he doesn't have said job anymore is because somewhere along the way he Turned To The Dark Side. What's more, now our Hero has to attempt to take him down, a guy that knows all his moves, probably better than he does, knows the hero's organization inside and out, and probably has a fearsome reputation to boot. This will not be easy; he's probably one of the most difficult villains the hero will ever face.

The Evil Predecessor is a common villainous archetype who often acts as the Evil Counterpart to The Hero. Along with sharing a position with the hero, automatically making them similar, they tend to share certain abilities and powers the hero might have learned for his job as well, and what's more, he tends to be way better at them. While some of these characters were evil to begin with or seduced to evil out of their own weakness, it's also very common for this character to be a Knight Templar or Well-Intentioned Extremist who either didn't think his position allowed him to go far enough in whatever his office does (see also The Paragon Always Rebels), or he rebelled against his organization after finding out some terrible secret about them. Very often, this character gives some kind of Join Me or "Not So Different" Remark to The Hero, sympathizing with the hero based on having held the same position. Alternatively, they may just think The Hero sucks at their job and doesn't even come close to equaling the Evil Predecessor in his day, and may dismiss him entirely.

Ocasionally, the hero's evil predecessor is long dead, and the current hero has to deal with the ligering effects of the predecessor's misdeeds as part of being the successor. There are also cases where the predecessor is thought to be good, but then is revealed to be Evil All Along.

Often involving the Evil Predecessor being A Pupil of Mine Until He Turned to Evil to the hero's mentor, and the hero being the Mentor's New Hope.

Often the Evil Predecessor is one of the more complex villain-roles, challenging The Hero to examine his own abilities, actions, and morals and make his own decisions on right and wrong. For this reason, the Hero's Evil Predecessor plot is good fodder for drama.

Compare Fallen Hero, which it often overlaps with. See also Psycho Prototype, for when the predecessor is also the prototype to an experiment. May be the result of Expose the Villain, Get His Job. When the protagonist is the Evil Predecessor, then he might be a Rogue Protagonist. Compare also Redeeming Replacement when a new hero is put into an established villain's identity and power; in this trope, it's the hero who's established first.

Doesn't actually have anything to do with a Predecessor Villain.

This trope usually comes out with The Reveal, so beware of unmarked spoilers!