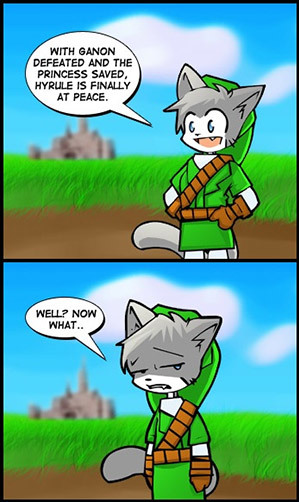 Mah boi, this peace is what all true warriors strive for!

"When Alexander saw the breadth of his domain,
he wept, for there were no more worlds to conquer."
— Apocryphally attributed to John Milton, speaking about Alexander the Great
Advertisement:

So you have a character who has achieved some incredibly difficult or elusive victory that they've been working towards for just about forever. Now that it's finally over and all their efforts have paid off, they've got it made, right?

Not if Victory Is Boring. If the character is a villain, now that they actually went ahead and pulled off their plan to Take Over the World, they have to actually run it. And fill out all the required paperwork. In triplicate. Man, those days when the heroes would foil your latest plot every single week only to let you slip away at the last minute were so much more entertaining than this! (Wait, is that why the heroes did it in the first place?!!)

On the other hand, if the character is a hero, then maybe winning and having finally shown up The Rival or won the big tournament or game they've been dreaming of since they were a kid leaves them saying So What Do We Do Now? If the hero is particularly Hot-Blooded, battle addicted, fond of adventure or just plain crazy/sociopathic, he might start going out and trying to find/create new challenges that weren't there before. If only there was some reliably recurring villain that could keep them occupied...

The Trope Namer is Mai from Avatar: The Last Airbender, who proclaims the phrase after catching siblings Sokka and Katara during second season episode "The Chase".

Before we get into any examples, we should note that every Video Game will eventually fall into this trope. No matter what, some players will beat everything, get the Infinity +1 Sword, 100% Completion, etc. and even they will still quit eventually. So please, limit it to in-universe examples. See A Winner Is You for games with unsatisfying endings. Compare It's Easy, So It Sucks!, for when a game is boring even before reaching victory due to its lack of difficulty.

Yet more proof that Status Quo Is God and that Failure Is the Only Option, for everyone. May invoke Wanting Is Better Than Having. Compare with Pyrrhic Victory, Pyrrhic Villainy, Vengeance Feels Empty, Was It Really Worth It?, No Challenge Equals No Satisfaction, and Lonely at the Top for other times when winning turns out not to be all it's cracked up to be. See also And Then What?, Rich Boredom, The Perils of Being the Best, and Comically Invincible Hero, which may overlap.

Subverted. Misty seems to reveal that she'll feel lost and unfulfilled, now that she has finally captured the Bad Guys. But it turns out to be a joke. This is actually her best day ever.

Subverted. Misty seems to reveal that she'll feel lost and unfulfilled, now that she has finally captured the Bad Guys. But it turns out to be a joke. This is actually her best day ever.