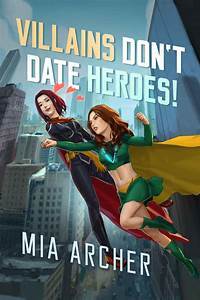 The cover of the first book
Advertisement:

Night Terror is the greatest supervillain in the world. Between her superhuman inventions and "no collateral damage" policy, she has her entire city completely cowed. All the other villains report to her, heroes only occasionally pop up to get smacked down, and civilians are kept out of the crossfire.

She's bored out of her skull.

During a mundane bank robbery she started just to do something interesting, she encounters Fialux, a new hero in town. Despite her best efforts, Fialux quickly overpowers her and takes her to jail. After Night Terror escapes, she makes it her mission to take Fialux out.

Possibly on a date.

A lesbian romance novel by Mia Archer, and the first of a series about Night Terror and Fialux's tempestuous relationship. Seven more books have been published in all.