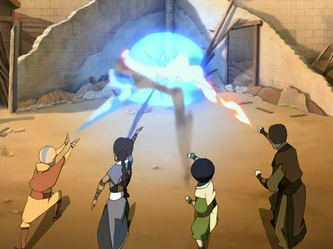 Azula fights off the combined might of Aang, Katara, Toph, Sokka, and Zuko.
"Well, look at this. Enemies and traitors all working together."
—Azula

Spring has sprung, and the Gaang, newly augmented by Toph, travel on Appa. When they make camp for the evening, Katara and Toph begin to bicker: Toph refuses to help with chores. "I carry my own weight" is Toph's excuse. Then they're disturbed by the advent of a large metal train-vehicle-thing containing Azula, Mai, and Ty Lee, and have to flee without sleep. Zuko pursues them, and Iroh him, all leading to one big brawl at the end.

This episode is a step away from standard Avatar fare in that it doesn't really have a single overarching goal that Aang and his friends are trying to accomplish (besides "survive"); it just throws all the show's main characters together and lets them bounce off each other. It is driven solely by character and evolves much more organically.

Aang tries to calm Katara down after an argument with Toph. Katara doesn't take it well.

Example of:
I Resemble That Remark!

Aang tries to calm Katara down after an argument with Toph. Katara doesn't take it well.