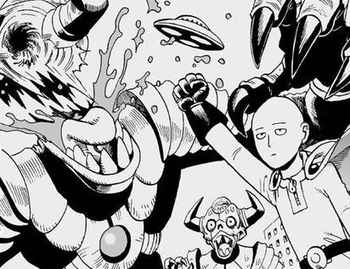 Some shows play a hero's absurdly overpowered abilities and near-invulnerability for laughs. Since the fights themselves are a foregone conclusion, they frequently get skipped or handled in one panel (this trope is particularly common in comics). The characters frequently lampshade this trope, and in the rare case where a fight actually does have any build-up, it will often end in a deliberate anticlimax. Sight gags are often used to lampshade it further, such as supporting characters playing cards or otherwise ignoring the latest Big Bad (or even the fight itself).

Works with this trope tend to bring in enemies capable of threatening the hero eventually, especially as time goes on and the initial joke wears thin; this can turn the hero into a plain old Invincible Hero if the comedy is discarded entirely. Sometimes this also involves Cerebus Syndrome as the comedy fades into the background at the same time. Up until then, though, the vast majority of fights are deliberate, comical Curb Stomp Battles.

When you have an invulnerable hero in a dramatic show or one that tries to get you to take the fights seriously, it's an Invincible Hero. When the focus is on the Rule of Cool, it's a Showy Invincible Hero.

Might feature The Ace, or instead Inspector Oblivious. Compare the Iron Butt-Monkey.