Literature / The Chronicles of Amber 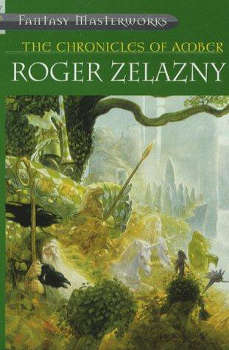 "Never trust a relative. It is far worse than trusting strangers. With a stranger there is a possibility that you might be safe."
Advertisement:

Amber is the one true world of which all others, including our Earth, are mere shadows.

A man wakes up in a hospital with no idea of who he is. Among the small number of things he remembers is a great range of skills and experiences, the fact that he heals fast, and never to trust family. When he visits the sister who had him committed, he finds in her possession a strange deck of Tarot cards featuring familiar faces in Renaissance Fair clothes, one of which is his own. Trying to find out more about himself without revealing he has no memories, he gets carried into a knot of family intrigues, counter-plots, magic, swashbuckling, and assassination. After all, just because he doesn't know the ins and outs of whose Throne is at stake doesn't mean he's not a contender.

The Chronicles of Amber happily combines different streaks of Fantasy and Science Fiction and all kinds of Other Dimensions. It features both epic elements and a dark-ish Sliding Scale of Idealism Versus Cynicism.

Not to be confused with The City Of Ember. Also the classic Dungeons & Dragons module Castle Amber is not officially based on this series, instead being based on various works from Clark Ashton Smith, though some elements of the module are similar to certain ones from this series.

The Original Series (Corwin as narrator):

The Second Chronicles of Amber (Merlin as narrator):

In 1991, the Tabletop Game Amber Diceless Roleplaying was released, followed by Shadow Knight in 1993; the expansion Rebma was announced but never released. There was supposedly a prequel series in 2002-2006 by another author... but they never happened, as confirmed by George R. R. Martin and Neil Gaiman, two friends and colleagues of the late Roger Zelazny. During his life, Zelazny had repeatedly and firmly turned down the possibility of an anthology of Amber stories by other authors.

The novels and short stories provide examples of: