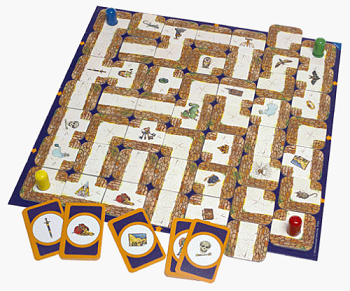 "What we all dread most is a maze with no centre."
— G. K. Chesterton, Father Brown

The characters are wandering through a maze, except that they just turned around, and the door they just came in from is now a wall...

Perhaps this place is a Living Structure Monster, is possessed by a demon or inhabited by a spirit, making it a Genius Loci, or it was built with tracks, pistons and engines to move according to the beat of an arcane clockwork heart (or high-tech AI), but usually, there is no way to stop or even detect the mechanism. You must let it herd you or puzzle it out the trick it wants. Alien Geometries (especially Oh Look, More Rooms!) may complicate it still further, along with any door being possibly a Cool Gate. As can the possibility of being eaten.

Sometimes it is, in fact, a mind game: the character's sense of direction is confused, or he can no longer recognize which parts he has been through.

The Maze is the parent trope. If paired with a Psychological Torment Zone, it becomes a deadly Closed Circle. Compare to Unnaturally Looping Location.

open/close all folders
Anime and Manga
Board Games
Comic Books