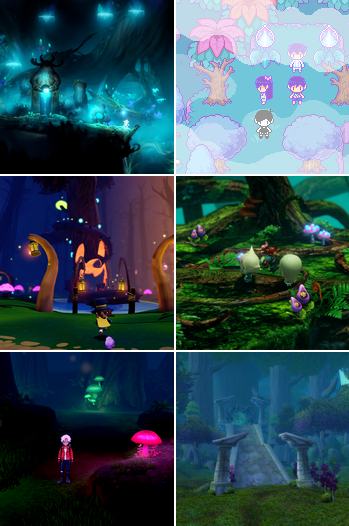 Wherever you go, there's really no way out. note Left to right, top to bottom: Ori and the Blind Forest, OMORI, A Hat in Time, World of Final Fantasy, Pokémon Sword and Shield, World of Warcraft.
Advertisement:

As a setting for video game stages, forest based levels are a cousin to the Green Hill Zone, and frequently occupy the second level — apparently operating by the logic that a forest is a little more dangerous than Ghibli Hills but not by a whole lot, and that plains and forest aren't too different considering that both are defined by the type of vegetation they have. Unless the stage is placed much later, then things will usually be a lot more difficult. Common foes will include woodland creatures and animated trees; if the Woods are haunted (later stages often are), ghosts may also appear.

Games which have more than one forest dungeon usually have a scenic, relatively calm and sunny version near the beginning (bordering on Ghibli Hills) and a heavily-shaded, more sinister version later on. The late-game forests have a stronger tendency to be a Forest of Perpetual Autumn. You may also find sections that require you to go inside the trees or even above them. A way to tell it apart from a forest-themed Green Hill Zone is by the type of forest it is. If it's a friendly looking forest, it's Green Hill Zone, if it's a spooky looking forest, it's this.

A common element of these levels is that, as the name suggests, they will be very easy to become lost in. This can be achieved by simply making the area very large, with lots of branching and winding paths with identical areas to confuse the player. Trees and other vegetation may also be placed as barriers growing across paths and may need to be burned or cut away to progress, or thick fog may further complicate pathfinding. If the Lost Woods are also an Enchanted Forest in-universe, they will have more obviously supernatural obstacles in place; a popular variant has players redirected to the forest's entrance or center if a wrong turn is taken when the path branches. The layout of the level could also be built around the existence of warp points to further disorient. Traversing the area often requires following specific instructions or figuring on the "trick" that points the player in the right direction.

Frequently a Genius Loci, but it's not required. For a slightly more realistic setting, see Wild Wilderness. Compare The Hedge of Thorns, Forest of Perpetual Autumn and Jungle Japes.

Named for the infamous Recurring Location in the Zelda games, mayoi no mori

(迷いの森) an idiom in japanese about being lost in mind and body.

A creepy forest area with whispering trees. Theres even a part where the paths all lead to the same place.

A creepy forest area with whispering trees. Theres even a part where the paths all lead to the same place.