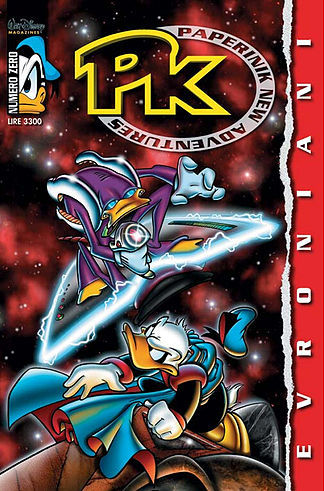 Paperinik New Adventures is perhaps one of the strangest (at least to non-Italians) but most interesting titles produced by Italian Disney comics.

The main character? Paperinik (known in anglophone countries as Duck Avenger, Superduck, Phantom Duck, and a lot of other names), a small-time superhero who has been defending the city of Duckburg against its criminals for years in the Duck comics universe. You probably know him better as his civilian personality, Donald Duck.

In an obvious case of Italians Love Donald Duck, the character of Paperinik was created way back in 1969 as a Gentleman Thief Secret Identity to make Donald Duck less of a loser and capitalize upon the success this kind of stories was having in the country at the time (see Diabolik, which also inspired Paperinik's name — "Paperino" is Donald Duck's Italian name), but he quickly switched from avenging the wrongs he suffered in his Donald Duck persona to generally fighting crime, thanks to the various super-gadgets built for him by Gyro Gearloose. For more than a quarter century many stories about him were written, most of them totally out of continuity, and some even contradicting previously established facts, with the popularity of the character waxing and waning in cycles, though he was always well-received.

In the mid-1990s, the italian Disney Comics experimented a rapid diversification with a wave of new talents (Paolo Mottura, Tito Faraci, Alberto Lavoradori, Casty...) eager to experiment beyond the established formulas of the past decades and to tackle more adult themes. During a phase of lack of inspiration for the "classic" Paperinik stories, PKNA came in as an attempt to write single-issue adventures that would fit into an over-arching continuity; a "disruptive" project commissioned to a group of mostly young talents, who had no problem admitting that they were "trying to play Marvel". This was the first comic book that Disney Italy published in the American comic book form factor, further emphasizing the attempt to compete with them on their own ground. (In a twist of irony, Disney now owns Marvel.)

It all starts when, while patrolling the city, Paperinik runs into a TV star being attacked by aliens, and all his weapons prove to be useless against them; he's only saved by the intervention of the police. Soon afterwards, Donald Duck gets a job as the caretaker of his uncle's new purchase, a 150-floor-tall skyscraper called Ducklair Tower, and accidentally discovers that the building actually has 151 floors: the "secret floor" is home to an AI called One, created by the original owner of the building, who decides to assist Paperinik in his new battles against time-pirates, mad scientists and alien invaders where his old gear would be of no help. And Paperinik is going to need all the help he can get, because he is soon facing major disasters, and even battles for the very future of planet Earth.

Paperinik New Adventures ran for 52 issues (March, 1996 - January, 2001) plus four special issues detailing various elements of the Back Story and focusing on minor characters. It was followed by another series in the same continuity, PK2, which was not quite as successful, and ended after 18 issues and one special. It was, in turn, followed by an Ultimate Universe continuity reboot, called simply PK or Pikappa, which lasted 32 issues but was even less successful. The first series, considered one of the finest things Disney ever made by a very loyal fan community, has been re-printed several times.

The series also reignited interest in the classic Paperinik, who has gotten many new stories since, and even a monthly magazine publishing both old and new stories, called "Paperinik Appgrade" and then simply "Paperinik", since 2012; meanwhile, rumors of a new PKNA series proved to be just that for many years. This changed in late 2013: series creators Francesco Artibani and Tito Faraci announced a return of the series, as a direct sequel to PKNA and PK2, thanks to the interest of the new Italian publisher of Disney comics (which, in a further twist of irony, is the same that's been publishing Marvel comics in Italy for years).

Since 2014, the franchise has been relaunched in several directions.

For a long time, the original series has had no official translation into English; only part of the reboot, Pikappa, had been made available in English with the title Superduck. In August 2016, PKNA began getting an official English release as Duck Avenger through IDW Publishing... only for it to be suspended after six issues due to low sales, leaving once again scanlations as the only way for English speakers to read PKNA, PK2 and the rest of Pikappa.

A video game based on the comics, Disney's PK: Out of the Shadows, was made and released in English in 2002, but failed to attract a substantial audience and was only loosely related to the comics. A second video game, The Duckforce Rises, was released for mobile phones in 2015. It features a mix of the classic Paperinik with the DuckTales universe.

Compare Darkwing Duck, another Disney series about a superheroic waterfowl.

Oh, and give the recap page some love.

open/close all folders
#–C
D-I
J-P
R-Z
There's Trauma, with Super Strength and psychic powers enabling him to amplify fear into utter terror and subsequently feed from it.