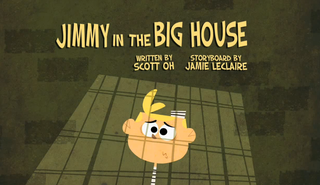 The daughter: This is a picture of me and my father. We used to go to the park everyday. But now my father can't, because he is in prison. Today my mother is taking me and my little brother to prison to see our father. My mother told us that we can talk to our father, but we can't touch him or hug him.
— The animated insert from Sesame Street: Little Children, Big Challenge - Incarceration
Advertisement:

A prison-centered installment in a larger work that is otherwise not about prison. It might be an episode in a serial, a sequence in a video game, or a few chapters in a book.

Usually this involves one or more major characters being in prison, or at least in noticeably prison-like circumstances. In some cases, they might run the prison. Be on the watch for Clear My Name, Clear Their Name, or a Prison Riot, among other things.

When this trope shows up in video games, you can expect the inventory of the player character(s) to be taken away. This results in the player having to use stealth and cunning to avoid the guards, until the hero(es) get their inventory back.

Despite this being only a segment of the series, it might end up having permanent effects on the tone of the series from that point on. For example, it may portray major characters as becoming more inclined to crime as a result of said imprisonment. More generally, a prison episode is often used to show and/or begin a Darker and Edgier Tone Shift.