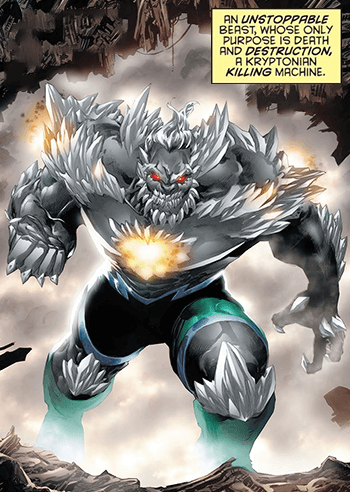 Being named Doomsday is not a requirement.
Anubis: Silence! Now, after 5000 years of waiting, I'll destroy the world!
Yami: Why would you want to do that?
Anubis: What?
Yami: What's the point in destroying the world? What do you gain from it?
Anubis: ... I don't understand the question.
— Yu-Gi-Oh! The Abridged Series
Advertisement:

The Generic Doomsday Villain is an overpowering antagonist with no clear motive or plan behind their actions. They do not fancy themselves to be doing the right thing, they're not Driven by Envy, they have no personal vendetta against any of their victims, they're not being compelled in any way, they are not in it for the money or power, they're not seeking Revenge for any real or imagined wrong done to them, they're not trying to satiate their excessive Pride, they're not even a sadist who enjoys hurting people. They may have an objective, but they never have a coherent reason behind it. Essentially, a villain who is a Flat Character, defined solely by the threat they pose.

Often this is done intentionally—because, for instance, the author wants the focus to be on the heroes and the sacrifices, growth, or struggles they have to go through to confront the threat; the villain isn't fleshed out because they're not truly important to the story the author is trying to tell except as a background driver.

In some cases, the villain may not have any true intelligence and be simply bestial and mindless, being presented as a force of nature, a natural disaster or as a threat beyond human comprehension—not really intended to be a character in their own right, just something that happens which the heroes have to deal with. This can also be used to raise the threat factor, by portraying them as something that cannot be reasoned with. They may also be an allegory, personifying a real-world threat that has no sentience of its own.

Often, especially in serial works, a villain will start out as a Generic Doomsday Villain, only to have their backstory elaborated on or expanded by later authors. Another common twist is to have the Generic Doomsday Villain be the creation of another villain with proper motives, who created them only to destroy and harm others. Turned Against Their Masters or Evil Is Not a Toy is very likely in this scenario.

A related concept is For the Evulz, where a villain does evil simply for the sake of it. This can be confused with a Generic Doomsday Villain, but For the Evulz as a motive more specifically emphasizes the villain as a sadistic asshole who gets off on their acts. A Generic Doomsday Villain will usually lack even that aspect to their personality, seeming to do evil for literally no reason because that's just what they do. Also don't confuse with Omnicidal Maniac. First, while a Generic Doomsday often can be an Omnicidal Maniac, this trope is by no means limited to villains who want to destroy the world. Second, a Maniac's plan might not strictly make sense from a practical point of view (as it negates their own continued existence), but their destructive end goal is often motivated by genuine Straw Nihilist sentiments and similar motives.

Also contrast the Complete Monster, a purely evil character with an established motivation and characterization.

Some bosses a player comes across in a video game are may be this, as they exist more as obstacles to the player than real characters. Bonus Bosses are susceptible, especially when they're a Giant Space Flea from Nowhere, as them getting buildup aside from being a major challenge might result in vital story being wasted building up a fight many players will never even bother with (though this can be averted if the Bonus Boss is an already established character).

See also Invincible Villain, who generally receives more characterization, but whose functional or actual invincibility causes them to also become defined more for the threat they pose to the hero.

While similar, it should not be confused with Diabolus ex Nihilo, which is a powerful villain who comes out of nowhere to shake things up and promptly move off. The tropes may overlap, but in other cases, a Diabolus ex Nihilo may still have understandable motives. For example, The Silver Chair never gives any concrete background on the Lady of the Green Kirtle, but at least we know she wants to conquer Narnia.

The Outside-Context Problem may appear similarly powerful with as little motivation, but in their case the answers come before long, and it's established that their being unknown to the in-universe world at large is part of the threat. Contrast Visionary Villain.

Important Note: Please be aware that this trope tends to get tossed around a lot; any villain who doesn't have the clearest established motivation or most interesting personality will often be called one, even if they don't meet the other criteria. So, be careful when deciding who counts. Rule of thumb is, if the character is already listed as a Complete Monster or a Magnificent Bastard, they do not count no matter how boring or badly-written you personally find them.

Even though he's fully sentient, HADES has little in the way of personality, only existing to carry out his sole function of exterminating all life on Earth. What level of cunning and deceit he does display turn out to be on the advice of Sylens. If anything, this makes it more horrific; it can't be reasoned with, only bound or destroyed and it gives it an eldritch Lovecraftian quality.

Even though he's fully sentient, HADES has little in the way of personality, only existing to carry out his sole function of exterminating all life on Earth. What level of cunning and deceit he does display turn out to be on the advice of Sylens. If anything, this makes it more horrific; it can't be reasoned with, only bound or destroyed and it gives it an eldritch Lovecraftian quality.