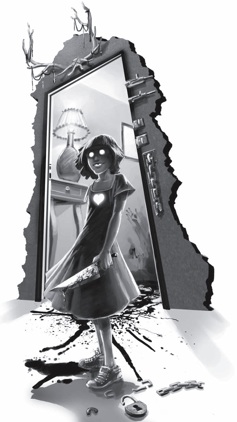 It's playtime.
"I need a soul, Ralph. Any soul. Yours!"
— Bart Simpson, The Simpsons "Bart Sells His Soul"
Advertisement:

When people use the phrase "soulless monster," they usually mean the person they're referring to isn't acting like a (decent) human being, not that they actually lack a soul and are a monster.note Well, a literal as opposed to a figurative one, anyway. In fiction, some characters really are soulless, and often act like monsters because of it.

When a character loses their soul, they normally become a listless Empty Shell, transform into The Heartless or simply die; the Soulless, however, are active, rational, and still recognizably human in almost every sense. They just lack a soul. The Soulless are often motivated by one thing only: getting a soul. Any old soul will do, but frequently they want their own soul back for sentimental reasons. Much like the "Damaged Soul" case of Came Back Wrong, problems arise because the character is no longer bound by ethical (and sometimes natural) laws and demonstrates a disturbing Lack of Empathy (and sometimes a lack of survival instincts). A Nice Guy will break fingers, The Cutie will just break, and even the Friend to All Living Things will rampage through a petting zoo if it brings them closer to their goal. While a soulless character doesn't necessarily become a soulless killing machine, sanity and morality don't fare very well without one. Even if both of these traits are independent of the soul and don't suffer in its absence, most Soulless characters have a change in worldview that does erode their good nature.

If they do get it back, expect a reaction along the lines of "My God, What Have I Done?" as the backlogged guilt catches up with them. At least, if they can get better.

Things can always go From Bad to Worse, of course. For some people, the loss of a soul enables them to freely jump headfirst down the slip and slide of The Dark Side, or simply smile and carry on as if nothing happened... and kill anyone who disagrees. Like an appendix, it was just a useless organ weighing them down. If the world is lucky, its absence will be felt before long. The Love Interest leaves them because they aren't treated the same (and their kisses no longer bring joy), they don't feel happy at a friend's birthday, or sad at their father's funeral. What they do feel is a keen emptiness that gnaws on their conscious mind like an ever-growing black hole slowly syphoning a star's outer layers. With any luck, they'll try to get their soul back using mostly moral means.

In short, this is can be summed up as The Sociopath + Empty Shell.

May overlap with Satanic Archetype, an evil character based on Satan.