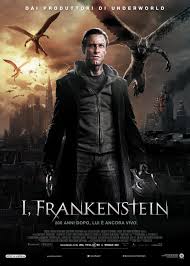 I, Frankenstein is a 2014 film written and directed by Stuart Beattie; distributed by Lionsgate; based on a graphic novel series by Kevin Grevioux.
Advertisement:

There is a war between the Legions of Hell and the divinely-created Gargoyles over the fate of mankind; a new entity is introduced, Frankenstein's Monster (Aaron Eckhart). Named "Adam" by the Gargoyles, who aren't entirely sure whether he should exist, he is pursued by the demons for some purpose.

I, Frankenstein contains examples of the following tropes: