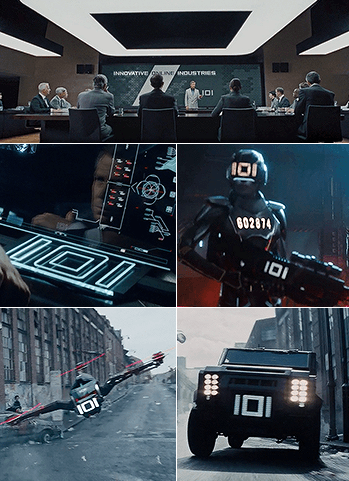 101 sigils of the IOI.
"These guys put their logo on more things than Nike does. How do they expect to remain secret when they make every effort to mark their equipment with a unique, unmistakable symbol?"
— The Spoony One (review

of the Hitman movie), The Spoony Experiment
Advertisement:

In television, as in Real Life, any decent-sized organization will have a logo or symbol to identify itself. Said symbolism will appear when needed to identify the group, whether it's a discreet corporate logo on the building or an imposing banner behind the Diabolical Mastermind when he makes his world-threatening rants.

Some groups, however, carry this to a ridiculous extreme, especially if a megalomaniac villain is in charge or a Mega-Corp produces everything. When this trope is in play, the design will be wantonly slapped on everything in sight, down to the most mundane items and meaningless locations. Bathroom doors, coffee mugs, staplers, golf carts, Highly Conspicuous Uniforms — nothing is out of the question, no matter how trivial or impractical it may be. This reaches its fullest expression when entire vehicles and even bases are constructed in the very shape of the logo.

This is true even in an Elaborate Underground Base or a Supervillain Lair, where the only people present are supposed to be the Minions and the Goons; it's almost as if the Evil Overlord was worried his legion of mooks would forget where they were if they weren't reminded every two minutes.

Note that this trope is not limited to villains or Evilness. Good guys love branding, too.

Also see Highly-Conspicuous Uniform (when the sigil is overused on the mooks' clothing), Malevolent Mugshot (when a villain puts their own image everywhere) and Conspiracy Placement (when the Ancient Conspiracy hides clues among the Muggles). May Contain Evil.

Not to be confused with Instant Runes displayed by the copious dozens.

Cliffhangers Are the Worst

Lampshaded by Mariner after the holonovel, saying she's glad Boimler didn't end his program on a depressing catch for a sequel. This naturally leads into the actual hook: a familiar character joining a scary, "secret" organization.

Cliffhangers Are the Worst

Lampshaded by Mariner after the holonovel, saying she's glad Boimler didn't end his program on a depressing catch for a sequel. This naturally leads into the actual hook: a familiar character joining a scary, "secret" organization.