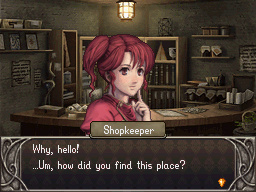 Jake: The entrance is disguised so you can’t find it. [...] And they don’t let anybody in without a VIP card. So don’t expect to waltz through the door by accident.
Marth: But... how do they stay in business?
Jake: Who knows! Last I heard, they were desperate for customers.
Marth: Then maybe they should reopen as a "tell your friends" shop...
— Fire Emblem: Shadow Dragon
Advertisement:

Most businesses follow a pattern: you need something to sell, you need people to buy it, and you need to make more money than you spent every time someone DOES buy it. This is pretty simple to understand.

But then there is that one shop, whose proprietor takes lack of advertising to another level: this shop's defining feature is how hard it is just to get in. Maybe it's just ludicrously hard to find or get to, maybe you need a keycard or passcode, or maybe only the king is allowed to shop there naked during a full moon while holding a child's teddy bear in one hand and the Sword of Plot Advancement in the other. Maybe some combination thereof. Either way, expect getting in to this place to be harder than getting to your local department store.

So how does this shop stay in business? That would be their secondary defining feature: this shop sells the good stuff, and for lots of money. If purchasable, this is the place where one would buy the Infinity +1 Sword, some spare Green Rocks, or a Wave-Motion Gun.

Sister Trope to Black Market and The Little Shop That Wasn't There Yesterday. Compare Business as Unusual.

A witch's cafe you're unlikely to find by yourself.

A witch's cafe you're unlikely to find by yourself.