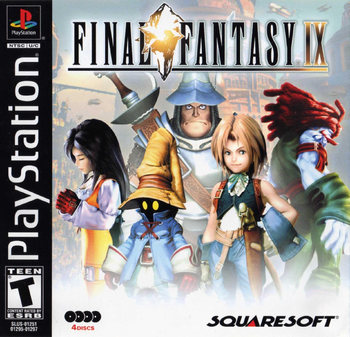 You Are Not Alone.
"You don't need a reason to help people."
— Zidane Tribal
Advertisement:

The ninth entry into the tail-pullingly popular Final Fantasy series, released in 2000 in Japan and the US and 2001 in the European Union.

Final Fantasy IX is a return to the series' roots and the classic Medieval European Fantasy worlds, after the more futuristic approach of Final Fantasy VII and Final Fantasy VIII. Both graphically and story-wise, it set a new standard for the games that followed it. Particularly, Final Fantasy IX is known for combining a sunny and light-hearted visual atmosphere with a very mature and thoughtful From Bad to Worse story. The game is additionally a celebration of Final Fantasy's origins, and contains many, many references to SquareSoft's earliest few installments.

Zidane Tribal is a Loveable Rogue and Gentleman Thief with a dash of Chivalrous Pervert thrown in. Along with the members of Tantalus, a troupe of thieves disguised as traveling entertainers, he plots to kidnap the princess of Alexandria and hold her for a nice hefty ransom. However, when she suddenly turns around and asks to be kidnapped to escape the clutches of her (suddenly) evil mother, what kind of gentleman would say no?

As it turns out, Princess Garnet is holding more than a wish to see the world: she is harbouring powerful Summon Magic within her body, and the Queen will stop at nothing to extract it for the sake of world domination. Aiding the Queen is a mysterious Arms Dealer called Kuja, who is bolstering her armies with powerful artificial mages.

Traveling along with Zidane are a cast of colourful characters: Vivi Ornitier, a young Black Mage who realises (to his horror) that Kuja's artificial mages look just like him; Adelbert Steiner, Garnet's incompetent but fiercely-loyal bodyguard; Eiko Carol, a Bratty Half-Pint summoner with a major crush on Zidane; Freya Crescent, a Dragon Knight searching for her lost love; Quina Quen, a genderless chef thing looking for delicious things to eat; and Amarant Coral, a mercenary/monk with a strong grudge against Zidane.

The story focuses on the characters' efforts at self-discovery. Vivi must learn what he is and why he exists, as well as what this means for his life. Zidane must learn what he is as well, and how this has to do with The Man Behind the Man, Kuja, and his friend Vivi. Garnet must learn the truth about her mother, her own origins, and the nature of the eidolons that are her birthright. Steiner must learn what honor and duty truly mean, when those he is loyal to stand opposed to one another, and his loyalty may be invoked to betray itself.

Freya must learn what's truly important in life, and what it means to lose a loved one, and most of all, how and why to go on fighting. Quina must learn about being a true gourmand, by sampling flavors from all over the world. Eiko must learn that True Companions are more than just grabbing who you want for yourself, and that being on the losing end of a love triangle doesn't mean being alone. Amarant must learn that strength isn't the ability to crush one's foes, and that the most elusive power of all is a thing he may never even understand.

Developed alongside Final Fantasy VIII with the intention of offering a retrospective look at the franchise as a whole, IX took a back-to-basics approach: you control up to four active party members again, everyone has a set role, and the game is challenging without being overwhelming. This was also the final Final Fantasy to include a traditional overworld. Square didn't anticipate that VIII would be such a divisive entry, so IX seeming like a response to that mixed reception was purely accidental, though that's not to say that its official publicity wasn't at least partly inspired by fans' opinions on the direction of the series.

Though seemingly-hard on the surface, this game was designed with newcomers in mind: There is no penalty for leveling-up (unlike in VIII), acquired skills can never be lost again, chocobos are easy to come by (along with encounter-free travel), and optional events are just that: optional. The plot, too, is less opaque than that of VII and VIII (though the now-obligatory space aliens still make an appearance), while still including some wonderfully-surreal elements. Series creator Hironobu Sakaguchi has at one point stated that he considers this game to be the quintessential Final Fantasy, it being an amalgam of all the key elements he'd been shooting for.

Released not too long after the PlayStation 2 hit shelves, this was the final Final Fantasy game of the original PlayStation cycle, and of the 20th century, except in Europe where it was the first Final Fantasy game in the 21st century (thank the Romans for not knowing what a zero was). The game saw an Updated Re-release on Microsoft Windows, iOS, and Android in 2016. A PlayStation 4 port was released in September 2017. It then made its way to the Nintendo Switch and Xbox One on February 13, 2019, making it the first new mainline Final Fantasy for Nintendo platforms since 1994's Final Fantasy VI on the Super Nintendo Entertainment System.note This is ignoring the Pocket Edition version of Final Fantasy XV

that it is in talks with Square Enix to produce an animated adaptation of the game aimed at a pre-teen audience, slated to begin production between late 2021 and early 2022.

There is a character sheet. Feel free to contribute.

In "Final Fantasy IX," Steiner discovers a letter while out patrolling. It's a love letter and when Beatrix appears on the scene, he wonders if it could be from her. Meanwhile, Eiko, as well as Marcus and Blank of Tantalus, are watching this with bated breath. Then Tantalus boss Baku shows up, sneezing up a storm, and totally ruins the scene, which Eiko calls him out for. (She having left the letter, hoping Zidane would find it.)

In "Final Fantasy IX," Steiner discovers a letter while out patrolling. It's a love letter and when Beatrix appears on the scene, he wonders if it could be from her. Meanwhile, Eiko, as well as Marcus and Blank of Tantalus, are watching this with bated breath. Then Tantalus boss Baku shows up, sneezing up a storm, and totally ruins the scene, which Eiko calls him out for. (She having left the letter, hoping Zidane would find it.)