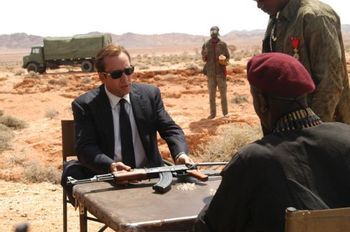 I sell to leftists and rightists, regimes and rebellions... Heck, I'd sell to pacifists if they weren't such lousy customers.
"There are over 550 million firearms in worldwide circulation. That's one firearm for every twelve people on the planet. The only question is, how do we arm the other eleven?"
— Yuri Orlov, Lord of War
Advertisement:

In its basic form, a person who sells weaponry. This results in a large variety of sub-types of these characters:

These characters are generally depicted as slimy merchants of death, making money from brutal wars and providing the means to prolong the conflict. They may be inclined to start a War for Fun and Profit, hoping to make money from selling weapons. Should there be no conflict at all, they may even take one step further and start one themselves. Sometimes, a potential customer may kill them and take their weapons.

Two more benign ones appear in specific settings, who escape this villainous depiction:

Not to confuse with Death Dealer, people who use playing cards as weapons, although as the aforementioned "merchants of death" thing shows, arms dealers are often referred to by the same term or variations thereof.

Stumpy, an alien with detachable metal arms owns Stumpy's Arms, where Lobo gets his weapons from.

Stumpy, an alien with detachable metal arms owns Stumpy's Arms, where Lobo gets his weapons from.