Film / The Quick and the Dead 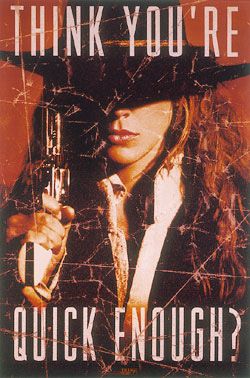 The Quick and the Dead is a 1995 Western revolving around a Quick Draw shooting contest that attracts a variety of competitors, some of whom have personal reasons for taking a shot at the reigning champion.

On Dia de los Muertos, a mysterious Lady (Sharon Stone) rides into the small town of Redemption, Arizona. Redemption languishes under the iron fist of its mayor, John Herod (Gene Hackman), an outlaw turned gangster, and his cadre of thugs.

That night, the annual Quick Draw competition is open for sixteen brave competitors, who can order anything they wish on Herod's bill, so long that they remain in the contest, and the victor of the contest will win a massive sum of money. Of course, you have to survive long enough to win to get it, and Herod himself is a competitor, known for his ruthless skill with a gun.

There's also The Kid (Leonardo DiCaprio), Herod's son, the local gun and dry-goods salesman, who's no slouch with a gun, and aching to prove to his father he's just as good as him.

There's "Ace" Hanlon (Lance Henriksen), "The Terror of Tucson," renowned both for his trick-shooting skill and long body count.

There's Sgt. Cantrell (Keith David), a former Buffalo Solider turned Gentleman Adventurer, but is there more to him than meets the eye?

There's Cort (Russell Crowe), an outlaw turned preacher who's not there by choice, a former protege-in-crime of Herod's, pulled from his mission and forced to compete for Herod's amusement.

And then there's the Lady herself, who seems to have her own history both with the town and with John Herod...

The film is directed by Sam Raimi, and executive produced by his long-time collaborator Robert Tapert. Sharon Stone is also a co-producer.

Not to be confused with a completely different Western starring Sam Elliott, based on a story by Louis L'Amour.