Give Me a Sword 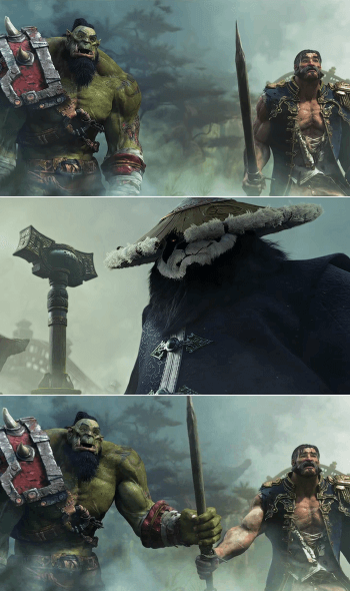 An unarmed character faces a fight. Another character must give him a sword or other weapon, or something such as a horse needed to enable him to fight.

Wrecked Weapon may lead to this or having a sword jam in the wound so the character can't pull it free.

It's often a tribute to the fighting skill of the unarmed man or Fire Forged Friendship of the one who gives it — especially if he does not use the Stock Phrase but the other characters do so anyway, or someone else says "Give him your sword." Location may also be significant — throwing a sword to a man who is toe-to-toe with the monster is only prudent (and avoids Throwing Your Sword Always Works). Of course, failure to do that gets the inverse effect, which may shade into The Dog Bites Back, if a Mook refuses to give the Big Bad something without which he is powerless and helpless.

Will certainly occur if needed for Combat by Champion. May occur for Duel to the Death, though the other character may defuse that one. If a bystander questions why the combatant doesn't just attack immediately while the foe is unarmed, the response will usually be because it's proper form.