Duel to the Death 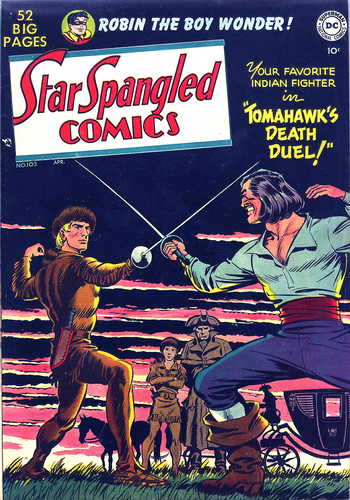 I can't tell what's wrong or right
If black is white or day is night
But I know when two men collide
It's a question of honour!
— Sarah Brightman, "Question of Honour"
Advertisement:

An affront has been committed!

The hero has been affronted. Or the villain has. Or someone has dragged the Damsel in Distress into some dangerous situation against her will. Or someone in the cast hasn't realized that they're in Cloudcuckooland and that it's a serious crime to offer Cheesy Poofs to the daughter of the mayor. Or it's a rival situation and "this town ain't big enough for the both of us."

Whatever the situation, sitting down rationally and talking out the differences is just not going to settle things. No, the only way the offended party feels they can have satisfaction is with a Duel to the Death — nothing else will do! So, after striking the offending person upside the head with a glove [horseshoe, brick, or rock optional] to announce your intent, possibly doing so in public, it's time to choose your weapons!

Weapon types can include:

...and it usually is considered bad form to use your superpowers if either or both parties has them. Villains, of course, will try to do so anyway. If one character lacks a weapon, Give Me a Sword may ensue — and other characters may use this to try to stop the duel. Generally, it is the right of the challenged to choose the manner of combat, and it is considered highly improper for the challenger to object to the choice.

Sometimes it's a formal "pistols at dawn" duel. Sometimes it's something dictated by The Government of the city, town, planet, or dimension in which the scene takes place. Sometimes it's just a fight where there's an unspoken certainty that the loser will not be getting up again. Sometimes the location and circumstances of the duel are quite outrageous.

When the hero wins, he will almost always show mercy to his opponent, much to the opponent's humiliation (unless he's an Anti-Hero out for revenge, in which case all bets are off). In such cases, the villain may taunt the hero for cowardice or weakness; or he may try to take his own death blow after the duel has officially ended and the hero is walking away, in which case, fifty-fifty, the result will often be the villain getting killed in self-defense (a form of Karmic Death) or the hero or one of his friends stopping the villain Just in Time.

When the villain wins, you can count on the villain to strike mercilessly. The other party will die or may have to be rushed to whatever works for first aid/resurrection in this instance. On the other hand, this may be the point of which you learn the other character is not a villain (Get It Over With is common).

And several duels in media end with the loser having to get out of town.

Honor may (theoretically) be satisfied with first blood, or first serious injury. However, because it will be fought with real weapons, any duel can end in death.

Commonplace in westerns, naturally, with the Quick Draw shoot out Showdown at High Noon as the duel type. Jidaigeki or chanbara movies also tend to end this way, with two samurai engaging in a Single-Stroke Battle over a matter of honor, and the outcome of this is usually the death of one or both of the samurai involved.

May overlap with Fight Clubbing, where the duel is, arguably, for fun. At least the spectator's fun. Compare Ten Paces and Turn. Often enforced in Gladiator Games and a Deadly Game. A situation where the combatants don't have a choice in the matter is an Involuntary Battle to the Death.

There are lesser variations, and greater ones beyond simply "to the death."

A lot of Card Game Anime actually end up with duels for The Fate Of The World rather than just the lives of the two involved. Serious Business, you know.

See Wizard Duel for the magical equivalent. Compare Combat by Champion, and Trial by Combat. Sniper duels are a subtrope, though they usually just occur in the normal course of warfare rather than being explicitly agreed upon beforehand.

The video game version of this, of course, is the Duel Boss.

Since this trope frequently involves death, fair warning: Spoilers beyond this point.