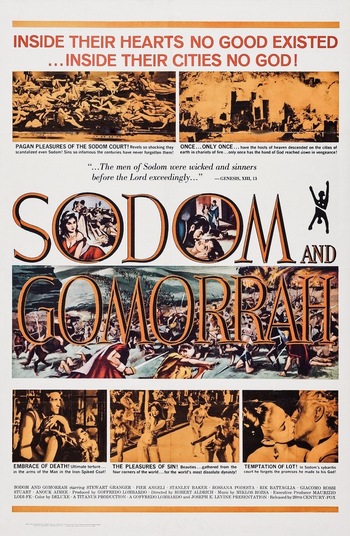 "But the men of Sodom were wicked and sinners before the LORD exceedingly."
—Genesis 13:13 (King James Version)
Advertisement:

Sodom and Gomorrah (known in the United States as The Last Days of Sodom and Gomorrah) is a 1962 Franco-Italian-American biblical epic film (very) loosely based on the story of Sodom and Gomorrah from the Book of Genesis, co-produced by Maurizio Lodi-Fe, Goffredo Lombardo, and Joseph E. Levine and directed by Robert Aldrich from a screenplay by Giorgio Prosperi and Hugo Butler.

The twin cities of Sodom and Gomorrah have grown wealthy from their salt mines, but the wealth is built on the backs of brutal slave labour, and the citizens have become decadent and corrupt, none more so than Queen Bera (Anouk Aimée) and her brother, Prince Astaroth (Stanley Baker). Astaroth is conspiring with the neighbouring Elamites to overthrow Bera and rule Sodom himself. The lives of the Sodomites are interrupted by the arrival of a tribe of Hebrews, led by Lot (Stewart Granger), the nephew of the Hebrew leader Abraham. Lot persuades Bera to sell the Hebrews the land on the opposite side of the River Jordan to Sodom, despite warnings that said land is barren and will be hostile to their attempts to grow crops and raise livestock. In exchange, the Hebrews will pay an annual tribute of grain and aid in the defence of Sodom against the Elamites. To seal the compact, Lot is given Ildith (Pier Angeli), Bera's personal slave. Despite the warnings, the land prospers thanks to a dam built by the Hebrews across the Jordan, and while Ildith finds the simple farming life a high price to pay for her freedom, she and the widowed Lot fall in love and marry.

But on Lot and Ildith's wedding day, the Elamites attack Sodom and destroy the Hebrew camp; the Hebrews win the fight by breaking the dam and flooding the valley, revealing that their land is rich in salt. Lot proposes that they should become salt merchants instead of farmers and herdsmen, and live among the Sodomites, whom he hopes to convert to belief in the Hebrew god, Jehovah. But it is the Sodomites who prove to have a greater influence on the Hebrews, and they become as selfish and greedy as their hosts; even Lot himself kills Astaroth in a rage when taunted with the revelation that the prince has seduced both of his daughters, Shuah and Maleb. Horrified at what he has become, Lot prays to Jehovah for guidance, and receives a startling message about what lies in store for Sodom and Gomorrah...

And if you're familiar with the Old Testament at all, you know the rest.

Miklós Rózsa provided the film's score, while Sergio Leone did uncredited work as a second unit director, overseeing some of the battle sequence between the Hebrews and the Elamites, but he left before filming finished; whether he quit or was fired remains unknown.note  Aldrich claimed he fired Leone after losing patience with the slow pace of second unit filming; Leone claimed he quit despite Aldrich's pleas to stay.

Under no circumstances to be confused with Sodom and Gomorrah: The Last Seven Days, a big budget pornographic film from 1975.