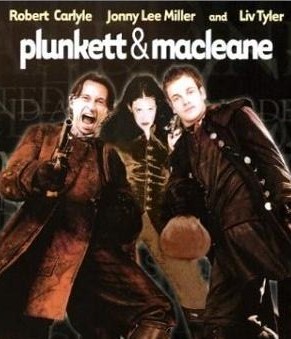 Plunkett & Macleane is a historical action comedy, released in 1999. The titular characters are based very, very loosely on real life highway men William Plunkett and James Macleane. The story itself? Pretty much nothing to do with them.

Set in 1748, when highwaymen are plaguing the wealthy along England's roads, the film a revolves around the criminal partnership of the titular characters. Macleane (Jonny Lee Miller) witnesses a robbery gone wrong when Plunkett's young partner is killed by Thief Taker General Chance. Desperate to clear his debts, Macleane attempts to retrieve a valuable ruby the deceased partner swallowed before his death. Unfortunately at the cemetery he's confronted at gunpoint by Plunkett (Robert Carlyle). Things take a bad turn for both parties when Chances men arrive to arrest them forcing Plunkett to swallow the ruby before their capture.

Realising Macleane's higher social status will allow him the means to bribe them both out of prison with the jewel, Plunkett proposes a new partnership. Macleane begins living among the rich, gaining inside knowledge so Plunkett can figure out how to rob them blind. Beginning a lucrative and highly risky business venture together. As their notoriety spreads, General Chance grows more eager to catch them in the act and Macleane begins to complicate things further by falling for one Lady Rebecca Gibson (Liv Tyler).

As a whole the film is your classic tale of unlikely partners becoming friends that just happen to be criminals in the 18th century. Expect entertainment and humour to take precedent over strict historical accuracy.