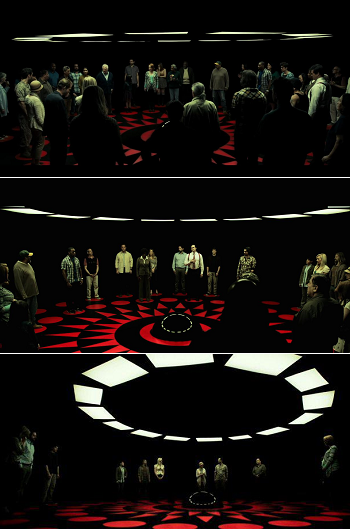 Every two minutes, choose who dies.
"Three down. Six down. Nine down. You get where I'm going with this."
— Richard B. Riddick, Riddick
Advertisement:

So you're The Hero on a dangerous quest, you gather The Team and rally that Rag Tag Bunch Of Misfits to your cause. Battles are fought, Character Development is had, Fire-Forged Friends are made, and hearty laughs are shared by all.

Then, as you proceed towards the final battle, your friends start to die.

When an author uses a Dwindling Party, it's to showcase just how dangerous the situation has become. Not only Can Anyone Die, but in fact, everyone is dying! The reasoning is that as audiences grow attached to characters, the Emotional Torque from their death will resonate more and more with each passing, until it reaches fever pitch when The Hero confronts the cause of all the deaths.

Usually it works pretty well, though there are risks to using this trope. Namely, killing characters off too quickly or without proper characterization will not elicit the audience's empathy at the deaths. Also, playing the Sorting Algorithm of Mortality too straight will allow viewers to pick off the obvious Red Shirts and avoid feeling urgency or attachment.

This trope is usually used only in the Action-Adventure and Survival Horror Genres because it's kinda hard to write a Love Dodecahedron when Everybody's Dead, Dave. There are a few common set-ups to each, but they usually boil down to:

This is a pretty common trope in these genres. However, it carries a few "common" twists that are often used to keep it fresh. While usually it's The Hero or Final Girl (plus Love Interest and/or Side Kick) who survive to the end, sometimes the last survivor(s) aren't the ones you'd come to expect, but more the "expendable" characters. It's also frequently used as The Cavalry by revealing one of the "expendable" characters survived and came back to help. Then again, whoever said someone should survive? A Downer Ending where everyone dies throws the Sorting Algorithm of Mortality out the window.

Another twist is to use this trope before or near the beginning of a story, leaving the Hero as the last survivor of their squad/family / camping trip. What follows is their rage fueled quest for revenge on whoever (or whatever) killed the rest of the group. And thanks to the Inverse Ninja Law, odds are they'll win. Of course, it's also possible that their superiors or the authorities force them to go back to help rescuers against their will.

There are also times when actually killing off the characters (and having them stay dead) isn't an option. They may be the main characters in a series where Plot Armor applies, or the work may be a prequel to another work featuring the same characters. In these circumstances, any scenario which involves the characters dying one by one can only be resolved by bringing them back to life. Or, rather than have the party be reduced in size via the deaths of its members, the work may have the characters be captured or otherwise prevented from continuing towards their goal, though this does mean there has to be some means of rescuing the trapped characters and reuniting them with their companions.

Related to Final Girl and Ten Little Murder Victims. When multiple characters say You Shall Not Pass!, leading to In the End, You Are on Your Own, its The Rest Shall Pass. This trope culminates in Everybody's Dead, Dave. Compare Minimalist Cast. Not to be confused with There Can Be Only One, where characters in the setting are explicitly out to kill/eliminate each other. If the circumstances allow everyone to come back afterward, it's a Climactic Battle Resurrection. Contrast with We Do the Impossible, for a team that subverts Dwindling Party (mostly) and gets the mission done. If the party is dwindling for non-lethal reasons, you're probably looking at Breaking the Fellowship or one of its variations.

As this is a Death Trope, beware spoilers!