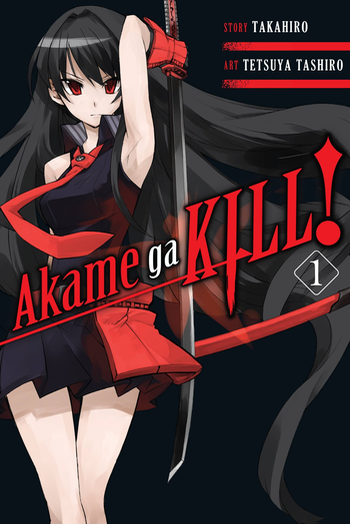 "Who's next?"
"Tatsumi, no matter how you dress it up, what we're doing is murder. There's no way there's any justice in that."
Advertisement:

A down-on-his-luck fighter named Tatsumi sets out for the capital to earn money for his starving village, and winds up fighting an Evil Empire of unimaginable corruption, all spreading from the depraved rule of Prime Minister Honest, who controls the boy Emperor for his own purposes, and General Esdeath, the strongest woman in the empire who aids Honest to create a world where only the strong rule. After nearly becoming a victim of this corruption himself, Tatsumi is recruited by Night Raid, a group of assassins dedicated to eliminating the corruption plaguing the capital by mercilessly killing those responsible. And so Takumi sets out to dethrone Honest and Esdeath in order to restore peace to the realm.

There is also a prequel manga called Akame ga Kill! Zero which focuses on Akame's time as an Imperial assassin.

An anime adaptation by White Fox aired during the Summer and Fall 2014 seasons. Crunchyroll streamed the anime, which can be viewed here

for people living in the following areas: note  USA, Canada, UK, Ireland, Australia, New Zealand, South Africa, Netherlands, Scandinavia, Latin America and Turkey. Because of the substantial differences between it and the manga, it has its own page.

Akame ga Kill! became one of the most requested Sentai Filmworks shows for airing on Adult Swim's Toonami. True to their word, the Toonami crew announced at Momocon that it would be the first Sentai show to air on the block. It premiered August 9, 2015 and finished February 21, 2016.

The manga ended in December 2016 after 78 main chapters and four side chapters (published in a volume called Akame ga Kill! 1.5). A manga created by Akame ga Kill's writer Takahiro, Hinowa ga Crush!, was released in June 2017

, with Akame having a role.

Mine claims to be a genius sniper. Given that she just took out her mark from over a mile away without using a scope nor hitting any of the women around him, this is no idle boast.

Mine claims to be a genius sniper. Given that she just took out her mark from over a mile away without using a scope nor hitting any of the women around him, this is no idle boast.