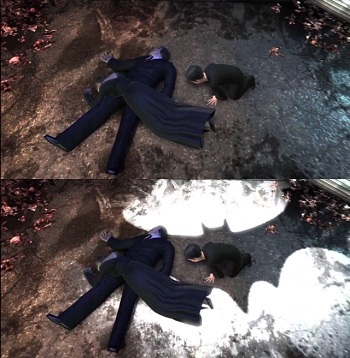 If you've read Comic Books, then you know Death Is Cheap, Staying Alive is easy and there's a thousand ways to trump the Sorting Algorithm of Deadness.

There are, however, some characters who stay dead. These are the loved ones who suffered Death by Origin Story, and play a vital role in the motivations of the hero. Their death can be (in)directly the hero's fault (Spider-Man, Uncle Ben), not their fault but still a huge motivation (Batman, Thomas and Martha Wayne) or simply there to add drama (Superman, Pa Kent). Similarly, Scars are Forever when they represent an important event for a character (for instance, Barbara Gordon's lower body paralysis. note Except in Birds of Prey (2002), where she got some spinal implant or something that allowed her to walk again to a limited extent.)

Sure, bringing them back is always possible and could take the story in exciting new directions, and deeply change the Fallen Hero when his dead little sister returns... or it just might be in bad taste, get poorly handled, nullify their motivation and lead to a Retcon or Author's Saving Throw that "they were really a robot Shapeshifting Alien clone... ninja" and promptly getting killed or forgotten. This is why Status Quo Is God.

Usually, the rationale for why they can't be brought back involves a Fantastic Aesop about not meddling with death because of dire consequences... except the hero, villain, and a score of other popular characters have already cheated death with no major consequences.

Usually this happens because The Call Knows Where You Live. When the loved ones aren't specifically murdered by a villain, their deaths are often due to something common and/or vague such as a car accident or some kind of disease that shall not be named. The cause of death can also start out very vaguely and then clarify (often disastrously) as the story progresses.

A variation of Death by Origin Story occurs when the important death is the main protagonist's own death, as important part of his or her own origin story. Usually, this involves a transition to an undead state of some sort, or alternatively, the character dies but is resurrected in a new form and granted superpowers. Or, it can become a mystery where the hero has to find out Whodunnit to Me? in order to either avoid death or avenge it.

When a series becomes popular enough, they might decide to make a prequel. The characters would still be alive at the time, but everyone knows they're Doomed by Canon and would watch it only to see how it happens if it wasn't shown already.

Compare Death by Newbery Medal, Last of His Kind, Dying to Be Replaced, Conveniently an Orphan, Plot-Triggering Death. If the death of a loved one causes a character to become a villain, instead, that's a variant of the Start of Darkness. Might result in Forgotten Fallen Friend. Frequently involves a Posthumous Character.

Examples of Own Death by Own Origin Story: