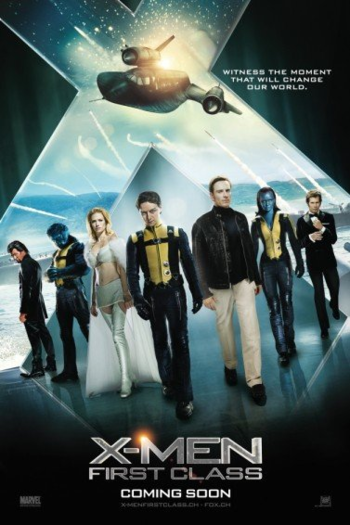 Their powers would make them different. But destiny would make them allies.note From left to right: Azazel, Beast, Emma Frost, Professor X, Magneto, Mystique, and Sebastian Shaw.
"When mankind discovers who we are, what we can do, each of us will face a choice. Be enslaved or rise up to rule. Choose freely, but know that if you are not with us, then by definition, you are against us. So, you can stay and fight for the people who hate and fear you. Or you can join me, and live like kings and queens."
— Sebastian Shaw
Advertisement:

X-Men: First Class is the second prequel in the X-Men Film Series set in 1962 during the Cuban Missile Crisis. Due to several continuity issues between it and the original trilogy, it really only works as a reboot rather than the prequel it was intended to be.

Before the mind-reading Charles Xavier was known as Professor X, he lived a privileged existence as a young brilliant Oxford graduate specialising in genetics, living with his shapeshifting foster sister Raven Darkholme. Before he took the name Magneto, the metal-controlling Erik Lehnsherr was a vengeful young Holocaust survivor bent on hunting down the depraved Nazi doctor who experimented on him and murdered his mother at a concentration camp in 1944, Dr. Klaus Schmidt.

The year is now 1962, and CIA agent Moira MacTaggert finds that Schmidt, now going by the name Sebastian Shaw, is working alongside mutants in a conspiracy involving the highest levels of the American and Russian governments. When she enlists Dr. Xavier to help her hunt down Shaw, Charles and Erik are unexpectedly drawn together. As they become close friends, the two of them work together to build a team of mutants (some familiar, some new) to stop Shaw and avert the greatest threat to humanity the world has ever known. In the process, a rift between them opens, which begins the eternal war between Magneto's Brotherhood and Professor X's X-Men.

Inspired to some degree by the "X-Men: First Class" comic book series (though by no means a faithful adaptation), this film also incorporates elements of the originally planned but now scrapped film X-Men Origins: Magneto. note Although director Matthew Vaughn and producer/writer Bryan Singer deny that the script for Magneto had anything to do with this, which means Magneto was always part of this film's script; in that case, scrapping that film probably made sense, as it would have been a bit redundant.

Interestingly, this is also the first film in the series to not feature Wolverine (aside from a very amusing 20-second cameo) even though FOX would soon follow up with 2013's The Wolverine.

Followed by X-Men: Days of Future Past.

Bonus points for his mutation being relatively minor, before it becomes much more pronounced after taking the serum and also that he uses it on himself as the first test subject, without even considering that it might turn out wrong. It's not like there's a big potential pool of test subjects for something like this, but given his state of mind, would he care?

Charles: Listen to me very carefully, my friend. Killing Shaw will not bring you peace.
Erik: Peace was never an option.

You Still Killed My Mother

During the final showdown with Sebastian Shaw, young Magneto reveals how much he agrees with the villain's philosophy and his actions. But that still doesn't let him overlook the fact that Shaw killed his mother.

You Still Killed My Mother

During the final showdown with Sebastian Shaw, young Magneto reveals how much he agrees with the villain's philosophy and his actions. But that still doesn't let him overlook the fact that Shaw killed his mother.