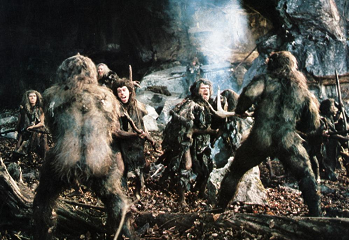 It is "Common Knowledge" that Cro-Magnon man exterminated the Neanderthal. And as we all know, History Repeats. Thus, it is inevitable that a more-evolved species of human (frequently "Homo superior") will exterminate a lesser-evolved species of human (frequently, our modern Homo sapiens sapiens). Of course, because Humans Are Warriors, the less-evolved humanity does not go gentle, and fights back against the more-evolved version. Depending on where the work falls on the Sliding Scale of Idealism Versus Cynicism, co-existence may be easy, difficult, or impossible. Frequently, expect modern humans (whether they are more or less evolved than the version of human they're fighting against) to "draw first blood" under the logic that Humans Are the Real Monsters. Sometimes, however, Homo superior bands together and institute a Masquerade to protect themselves until the day they inevitably take down those uppity Neanderthals. And then, some Homo superior Take a Third Option and say Screw This, I'm Outta Here!. One of these species is likely to attempt (or actually employ) a Final Solution on the other.

Expect the humans on either side to cite the tale of the Neanderthal versus the Cro-Magnon man (the more-evolved human to justify their extermination of the lesser-evolved, the lesser-evolved to justify striking first against the more-evolved to preserve their own race). The Cro-Magnon, through his superior intellect, drove the Neanderthal to extinction everywhere he went in a very short span of time. The poor, brutish, stupid Neanderthal just couldn't compete with the vastly superior Cro-Magnon and was put in its proper place (that is, nonexistence) by its more evolved cousin.

Except it (probably) didn't happen that way. For one thing, Cro-Magnon man didn't show up out of nowhere as a more evolved version of the Neanderthal. They were both divergent strains of the homo evolutionary tree who had been isolated from each other by geography and the climate (i.e., the Ice Age), but then intermingled as those restrictions lessened. Also, while it was the leading theory for quite some time that the Cro-Magnon violently replaced Neanderthals by weaponizing its greater intelligence, more recent evidence has many anthropologists believing that Neanderthals and Cro-Magnons co-existed and interbred. This interbreeding, in fact, is probably what contributed to modern human intelligence in the first place as Neanderthals, in inverse to what pop culture would say, had highly developed brains (their DNA still exists in peoples of Eurasian descent). The evidence is very new, however, and the "Neanderthals = dumb therefore extermination" model is still widely believed by many. As such, it's likely to show up in any work not made (or set) within the last few years.

However, the view that a more-evolved species will inevitably (and probably quickly) destroy a less-evolved species is slow to leave the public consciousness, and thus is still found in fiction. Thus, we have this trope: where the relentless antagonism between Neanderthals and Cro-Magnons, and Cro-Magnon's clear evolutionary superiority, spelled a rapid doom to the poor, hapless Neanderthal, and history is about to repeat/is repeating itself.

Sub-Trope of Evolutionary Levels, specifically involving Human Subspecies. People who often consider this as their life philosophy include The Social Darwinist, Evilutionary Biologist and Super Supremacist, painting whatever group they're against as the Neanderthals and their own group as the Cro-Magnons. A symptom (or justification) of Hollywood Evolution. See All Cavemen Were Neanderthals for more information. Has (probably) nothing to do with Cavemen Versus Astronauts Debate.

(Note that, while the trope isn't exclusively limited to hominid species, because Most Writers Are Human the trope is usually played out with Human Subspecies, or more rarely Human Aliens. The two species in question need to be closely enough related that they're subspecies, or one a subspecies of the other, otherwise the trope is The Right of a Superior Species.)