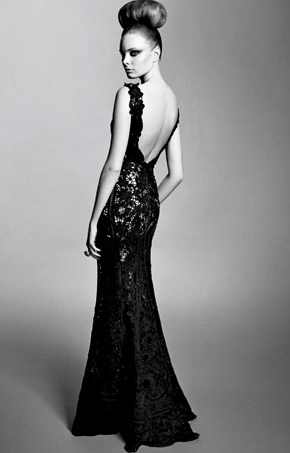 Backless outfits used for Fanservice. Ever since the 1920s and much of the 1930s popularized the backless dress or top, whether bias-cut, halter, spaghetti-strapped or strapless, it has been a nice way of showing a little skin (fair, olive, dark or tanned) without getting too raunchy; a deeply cut dress can show the entire back and maybe a bit more, and makes it clear that the lady is not wearing a bra. At the same time, it can be more elegant and mature than Midriff Baring Outfit or some of the other Fanservice Costumes. Or not.

The "elegant evening dress" version may come with opera gloves. Standard outfit for a Socialite at a glamorous gala or dinner party. Whether elegant or not, it may have slits to demonstrate her legs and she may do a Sexy Walk in that slinky dress.

Note that outfits that never have a back in the first place don't count (e.g., Chainmail Bikini).

This may be the standard outfit of a female Winged Humanoid, since wearing almost anything else would be impractical. See also Toplessness from the Back.