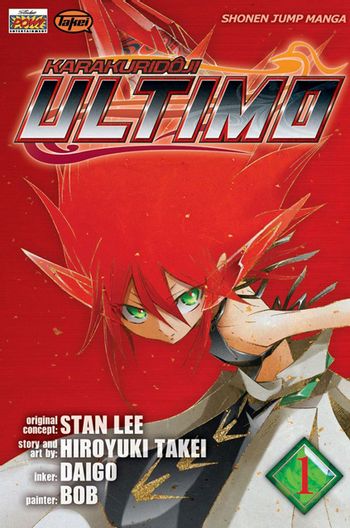 "You shouldn't rely on others to help you determine what's good or what's bad. In no time at all, you'll simply be under someone else's control."
Advertisement:

In 12th Century Japan, a man named Roger Dunstan unleashed his curse on the world with his creations. He created two Karakuridoji, 'mechanical boys', one representing pure good and the other representing pure evil. The two were to make contracts with human masters, learn about the world, and grow stronger... until one day, they would battle to the death, all for no other reason than to find out which of the two were stronger. In time, he also created others that represented the gaps of good and evil. Yamato, a bandit who fights an oppressive government, opened the boxes in which these two robots were contained and made a pact with Ultimo, the 'Ultimate Good'. The two fought together for some time, until Yamato's eventual death.

Cut to the present day, where Yamato's reincarnation stumbles into an old antique shop trying to find a birthday present for his crush. And of course, chaos erupts once again like centuries ago with Vice, the evil karakuridoji, already chasing Yamato's tail. The highly confused Yamato begins his struggle to survive and re-connect with his former partner, even as other Douji, both good and evil, begin to set their own plans into motion. And throughout it all, Dunstan continues to watch from the shadows, observing the ensuing chaos for his own enigmatic purposes...

Karakuridoji Ultimo ("Mechanical Boy Ultimo") is a manga created by Hiroyuki Takei (creator of Shaman King) and Stan Lee of Marvel Comics fame. The manga ran in Jump Square from 2009 to 2015, and was compiled into 12 volumes.

Takei's other series Jumbor Barutronica is arguably its Spiritual Successor.

. The forum thread is here