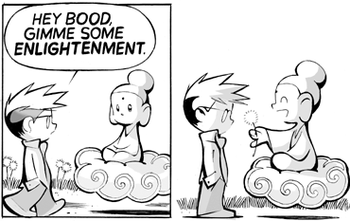 "Cryptic bastard."
... and she [Eris, Greek goddess of Strife] is far kinder to men. She stirs up even the shiftless to toil; for a man grows eager to work when he considers his neighbour, a rich man who hastens to plough and plant and put his house in good order; and neighbour vies with his neighbour as he hurries after wealth. This Strife is wholesome for men. And potter is angry with potter, and craftsman with craftsman and beggar is jealous of beggar, and minstrel of minstrel.
— Works and Days,

This is a Trickster whose actions, while seemingly pointless, selfish, antagonistic, or just plain random, contain a valuable lesson. If you're the hero in a series with a Trickster Mentor, life will probably be twice as hard — and twice as rewarding.

In more fantastic settings, this will often be a more benign Great Gazoo, who educates their proteges by subjecting them to various transformations, body-swaps, literal wishes, playful punishments, faked tests of character and insults meant to motivate them. Trickster Mentors love it when someone who first meets them doesn't realize who they are. They get to assess the "true character" of someone, then beat their sense of superiority out of them with it after the revelation. Or, rarely, give them a small break if they reveal honesty and good intentions.

Essentially, a blend of order and chaos in the finest Zen tradition. Some accompany their teachings with profound Koans, but they are just as likely to throw in a few Ice Cream Koans to keep their disciples on their toes.