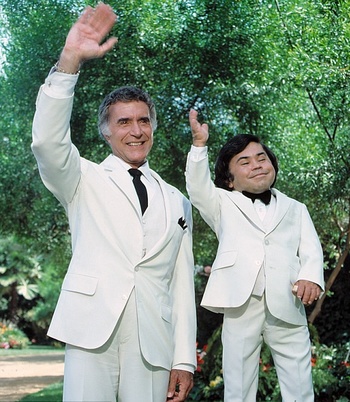 One of Aaron Spelling's biggest hits, the original Fantasy Island was introduced to viewers via two made-for-TV Pilot Movies in 1977. Those went on to spawn a highly popular series that ran on ABC from 1978 to 1984. Ricardo Montalbán starred as Mr. Roarke, the mysterious, charming, white-suited figure who ran the eponymous island. Assisting Mr. Roarke was his earnest, vertically (and verbally) challenged sidekick, Tattoo (played by Hervé Villechaize, also famous for playing Nick Nack), who kicked off every episode by running up to the island's bell tower, ringing the bell and loudly exclaiming "Da plane! Da plane!"

The plane he was talking about, of course, was the one that was delivering new arrivals to the island, each of whom had lain down a sizable sum of money to have his or her personal fantasies fulfilled. Mr. Roarke would take it upon himself to greet every guest as they stepped onto the island and then describe to Tattoo in an As You Know fashion, the nature of their fantasy request. Of course, being a supernaturally-powered Trickster Mentor, Mr. Roarke very rarely allowed his guests' fantasies to play out in the way they expected them to. And quite often the fantasies themselves were used to teach each guest An Aesop about some problem in their life — or simply to Be Careful What You Wish For. But rather often, everybody just had a good time, even if it wasn't what they were expecting.

The source of Mr. Roarke's strange powers and the reason behind his island's existence are never really revealed, although it is implied that he is a supernatural force for Good. (Perhaps even one of the Powers That Be. At one point, he battles The Devil, played to creepy perfection by Roddy McDowall, who is portrayed as a dapper foil for Mr. Roarke himself, dressed like a photographic negative of Roarke.)

In 1998, ABC hosted a Fantasy Island revival series that put Malcolm McDowell into the role of Mr. Roarke. McDowell's take on the character was a bit darker, as was the tone of the series. Gone were Tattoo and his antics. Instead, Mr. Roarke had a team of assistants, most of whom were compelled to serve on the island as a form of metaphysical punishment for their past sins. One of the assistants was a beautiful shape-shifting woman named Ariel (a Shout-Out to a character of the same name in The Tempest.) She was Mr. Roarke's right-hand woman and a source for much of the series' Fanservice. Mr. Roarke also employed an elderly couple as travel agents, who would book the fantasies at the beginning of each show. As mentioned before, McDowell's take on the Mr. Roarke character was a bit on the dark side, and he seemed to take more delight in watching the guests squirm under his treatment, but he was basically a decent fellow/omnipotent Trickster Being, and most guests came away better for their experiences. Of course, it was canceled after only half a season. This version is a little tricky to find, Syfy Channel reran it a bit before it was seemingly lost to the ether. Luckily you can now catch this version in its entirety on Tubi.

A horror movie based on the series was released February 14, 2020, with Michael Peña playing Mr. Roarke.

A revival/sequel series with family members of the original leads as main characters started airing on FOX on August 10, 2021.