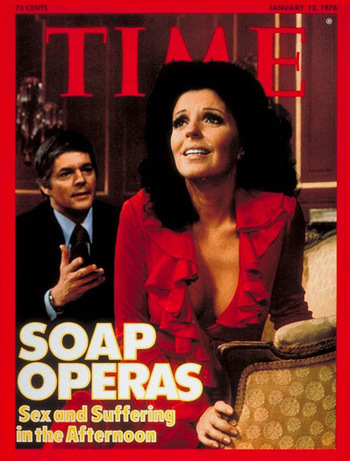 There was a lot of sex and suffering to go around in 1976, with 14 daytime soaps on US network television at the time. Pictured: Doug Williams (Bill Hayes) and Julie Olson (Susan Seaforth Hayes) of Days of Our Lives, often cited as the first soap Super Couple.
Joey: Well, I get the medical award for separating the Siamese twins. Then Amber and I go to Venezuela to meet our other half-brother, Ramone. And that's where I find the world's biggest emerald. It's really big—but it's cursed.
Advertisement:
Chandler: God, that is good TV.
—Friends, "The One Where Doctor Ramoray Dies"

A soap opera is a melodrama with a large cast experiencing dramatic events in their day-to-day lives, usually broadcast five days a week. Designed to be viewed intermittently, so that a single event may be stretched over three or more days.

A genre of storytelling which began on radio in the United States in the early 1930's, so named because its high drama was often interspersed with adverts for, well, soap; Procter & Gamble, manufacturer of such products, was the sole sponsor and producer for many of them. But there's no 'soap radio' anymore; with one exception (The Archers), the genre is mainly-associated with television. For a long time in the U.S., you could actually be fired for referring to your show as a "soap opera"; the proper term was "daytime drama". It's no longer enforced, but referring to it as a soap in front of actors or crew will still occasionally earn you a dirty look.

Death is not a big concern in the world of soaps; to the point that Friends, after Dr. Ramoray (Joey's character) had "his brain crushed" on Days of Our Lives, joked that he could yet return — and he did. However, most shows enjoy pretending that anybody can be snuffed out at any moment – particularly during a commercial or episode break. The truth is that contract re-negotiations are the leading cause of permanent death. Story progression often takes a backseat to what people actually want to see: Cat fights and screaming matches and every imaginable configuration of characters sleeping with each other. These habits are widely-mocked in other works whenever a soap appears or is mentioned. (For parodies of the soap genre, look up Soap Within a Show.)

American soaps were typically Long-Runners, easily extending themselves for years and even decades if successful (the record-holder being (The) Guiding Light, 1937-2009). Similarly, German and other continental European soaps typically follow this practice, lasting for years and years.

On a country-by-country basis, the main difference is the social class of people being portrayed: American soaps often featured filthy-rich characters with chic clothing and gorgeous mansions (think Dallas or Dynasty (1981)). Australian ones usually feature middle-class suburban white people, often young and healthy (Neighbours, Sons and Daughters, Home and Away); while British soaps are either lower-middle class (Brookside) or grimly and grimily working-class (EastEnders, Coronation Street). These class divides are not 100% certain but tend to dominate; see The BBC's aspirationally-luxurious Howard's Way, which ran for several years, but never won the hearts of viewers like "kitchen sink" soaps did. The feature common to all three flavours is that there is no one main character: Rather, characters drift in and out of focus as the storylines go on. Some characters may be more memorable or have more influence on The 'Verse than others, but nobody can be said to be the protagonist. (See also: Soap Wheel.)

Britain often run their soaps in Prime Time, as they do with their favourite Aussie imports, and so do Australians themselves. In contrast, American stations traditionally quarantine soaps into a late-morning or early-afternoon timeslot. That said, daytime soaps were reliable moneyspinners for the American networks from the days of radio all the way into The '90s, and served as a career springboard for many actors and actresses who went on to great success in more "legit" film and TV productions.

Although soaps originated in the U.S., the genre there has undergone a severe decline to the point that media analysts have declared it effectively dead. During the transition to The New '10s, four of the longest running and most successful soaps in history reached their finales: Guiding Light (still the longest continuous narrative in human history, even in 2022) was cancelled in 2009 after 72 years; As the World Turns ended in 2010 after 54 years; All My Children ended in 2011 and One Life to Live ended in 2012, both having run for over 40 years. Those were the first casualties, but not the last. There are several popular, somewhat interconnecting theories as to why soaps have declined in North America:

Many in the industry predicted that, while the soap opera will live on in American TV, the last of the classic daytime serials could be off the air by 2015… a prophecy which didn't come to pass. However, it is true that by then, only four 'prestige' soaps remained: General Hospital, Days of Our Lives, The Young and the Restless, and Bold and the Beautiful – down from 19 in 1969 and 12 as recently as 1990. SOAPNet, the one cable network dedicated to the genre and where most of the programs repeat, was removed from many cable systems in early 2012 to be replaced by Disney Junior, which was used as an excuse by ABC's daytime chief to kill All My Children and One Life to Live.note Although many soap fans feel that the truth is that then-ABC daytime chief Brian Frons, who had a history of cancelling soaps dating back to the series Santa Barbara, as well as firing veteran cast members without warning, had a vendetta against fans for rejecting his vision of what the ABC soaps should be: Namely an emphasis on gratuitous sex and violence over storytelling. In 2022, NBC announced that Days of Our Lives would move exclusively to the Peacock platform, meaning that for the first time since 1949, NBC would have zero soaps airing terrestrially. This move has led to speculation that the other three soaps might similarly migrate to streaming-only, but nothing has been announced as of yet.

Practically every nation on earth has soap operas (radio and TV), and loads of soaps is one thing you can always bet on an expatriate/tourist station carrying, regardless of country. The U.S. military's Armed Forces Network carries all four current U.S. soaps.note  This isn't as ridiculous as it seems. In addition to AFN needing to also cater to wives of service members who live on-base, being on active duty in a combat zone paradoxically means one has a lot of downtime in between operations, but when that downtime is isn't always predictable. The drawn-out meandering plotlines of classic soaps are ideal for that situation. For similar reasons, farmers have long been a significant Periphery Demographic for soaps.

For the modern variant, see Prime Time Soap or Supernatural Soap Opera. There is a "Latin" School of soaps, called Telenovelas to uncouple them from the Anglo school (encompassing the US, UK, and Australia), which are the standard in almost every nation from Mexico southwards. The Japanese equivalent is Dorama.

Aside from the fantastic elements (and even there, the line is blurry), this is largely the Distaff Counterpart to comic books, although the fans of that medium will never admit it.note  Coincidentally, Guiding Light and Marvel Comics even had a crossover comic book made in 2006. Professional Wrestling has at times been called "Soap Operas for men."

Not to be confused with Soupe Opéra.

Tropes named in honor of the genre because of their connections to it:

Tropes about soaps used in other genres: