Spell My Name with a "The" 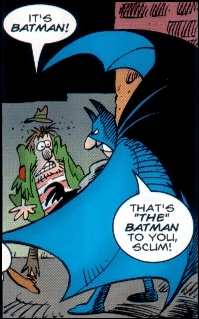 "Hmm, I'm not sure about 'Hulk' for a kid. Although I do like the sound of a name beginning with 'the'."
— Phoebe, Friends
Advertisement:

Some people want you to put a "The" before their name. Avoid these people. (In particular, if the name does not sound like an ordinary name — say, "the Ice" — then do not borrow money from them, or at least make very very sure to keep up with the payments and then some.) For two particularly ominous versions, see The Master and The Butcher.

Another particular use of this trope involves the use of emphasized "the"s — in text, written in either bold or italic fonts (or both) — to refer to someone or something that is well-known and/or set the current bar for other examples like it down the line, as if to say "this is the real deal." In This Very Wiki, it is customary to do this with Trope Codifiers, such as:

A form of Insistent Terminology. May overlap with Third-Person Person, and is commonly used with Capital Letters Are Magic.

In Japanese media, many works will feature a "THE" followed by the rest of the title in Japanese characters.

Compare The Magnificent, where the "the" goes in the middle—and which is not always bad. See also Red Baron, The Trope Without a Title, and The "The" Title Confusion, where it is unclear whether or not something should begin with a "the".

The Music
The Mythology & The Religion
The Pro Wrestling
The Radio Drama
The Roleplay
The Tabletop Games
The Tropes
The Video Games
The Visual Novels
The Web Animation
The Webcomics
The Web Original
The Web Videos
The Western Animation
The Stinger.
Feedback